For this month’s MxMo Nuts Challenge, I decided to recreate a drink that was one of the best I had in 2013. Last October while in London I went to The Blind Pig at Social Eating House, a bar in Soho, with a couple of fellow eGulleters/cocktailian friends. I was advised that there was one drink that was not to be missed on the menu, and I could tell why right away based on its list of ingredients. The primary ingredient is walnut-infused Smith & Cross rum which is something that is very hard to resist. This potent rum is paired with another Jamaican rum, Appleton, together with Cynar, lime juice, maple syrup, and orange bitters. It’s been a few months and I still think about that cocktail. The MxMo challenge gave me the opportunity to finally reproduce it at home. 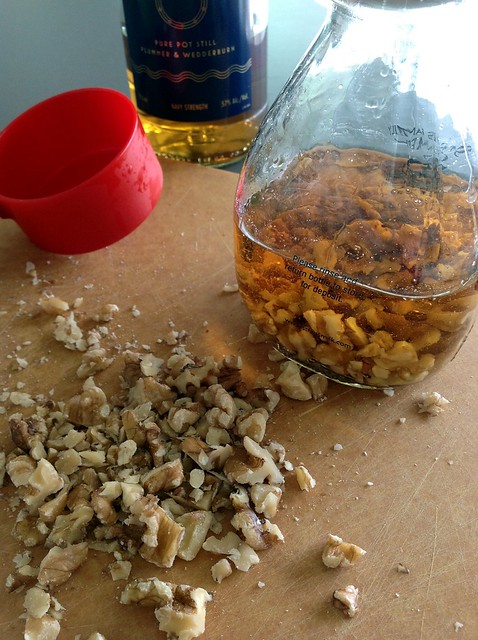 I started with the Smith & Cross walnut infusion. It’s really not that difficult: all you need is S&C rum, fresh walnuts, and a little bit of time. I used about 1 cup of rum and 120g of walnuts that I chopped roughly. I let the mixture sit at room temperature, occasionally giving it a good shake, and tasting it a couple of times a day until it was to my liking. I let it go for five days and decided it had enough of the walnut flavor without being overly tannic, and also I was growing quite impatient at that point. So I double-strained it using a nylon cheesecloth over a fine mesh strainer. 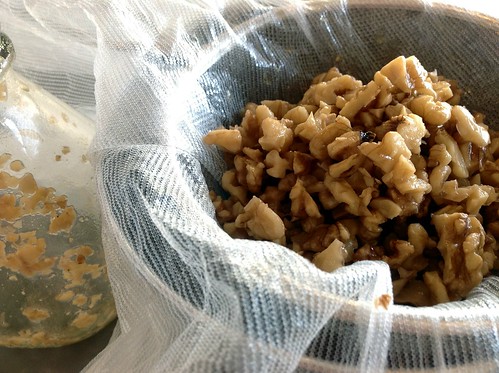 Then it was time to make the cocktail, which is named the Rum DMC. (Its creator, 2013 UK World Class Champion Gareth Evans, who very nicely shared the ratios for the cocktail, has a taste for pun-heavy cocktails.)

The walnuts in the rum go wonderfully well with the caramelized notes of the Cynar and the maple syrup. The cocktail is powerful and bitter, with just enough lime just to keep things light. 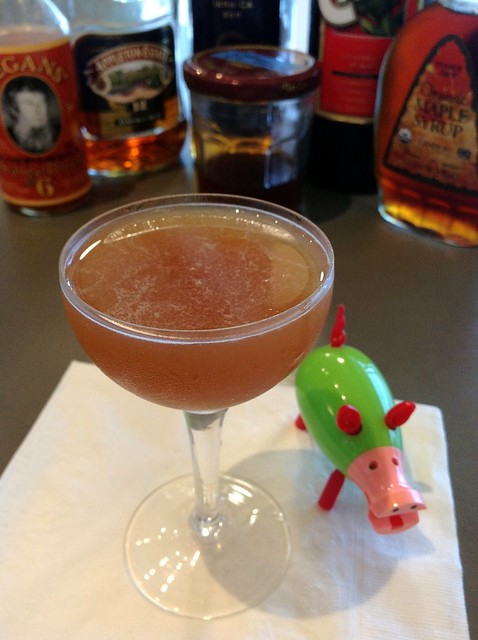 The beauty of the recipe is that you end up with this beautiful infused rum that is both versatile and delicious, and also with walnuts that are now soaked with rum. So it’s a perfect opportunity to use these nuts to whip up a batch of orgeat! I used the recipe from Jeff Berry in Beachbum Berry Remixed. 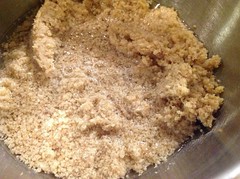 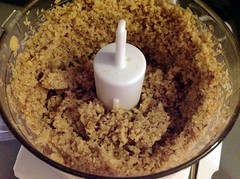 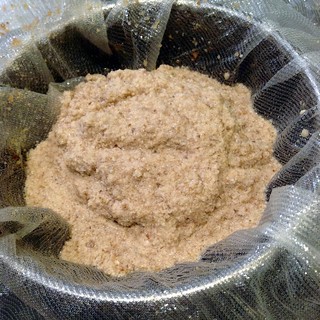 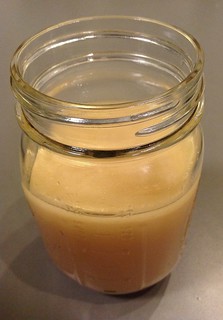 The walnut orgeat was put into good use in a Mai Tai variation. I drew my inspiration from the classic Trader Vic Mai Tai and another pun-incorporating-cocktail, the Arrack and a Hard Place which, as it names indicates, contains Batavia Arrack. Batavia Arrack is distilled from sugar cane and fermented red rice. It has a very pungent and spice-forward aroma and can be challenging to mix with. The recipe already called for S&C rum as another ingredient, so I used my walnut-infused S&C. For the second nut component, instead of amaretto I went back to the classic Mai Tai and used my walnut orgeat instead of the traditional almond-based orgeat. The orange liqueur was Clement Creole shrubb which is rhum agricole-based. Lastly, for the bitters, I married the whiskey barrel-aged bitters from the original recipe with pecan bitters from Miracle Mile.

The result is a cocktail that provides a nice transition from spring to summer. It feels familiar with the classic Mai Tai flavor profile – rum-forward, potent, and a bit tart. It is also full of spice with the batavia arrack, and feels cozy and comforting at the same time with its nut undertones. 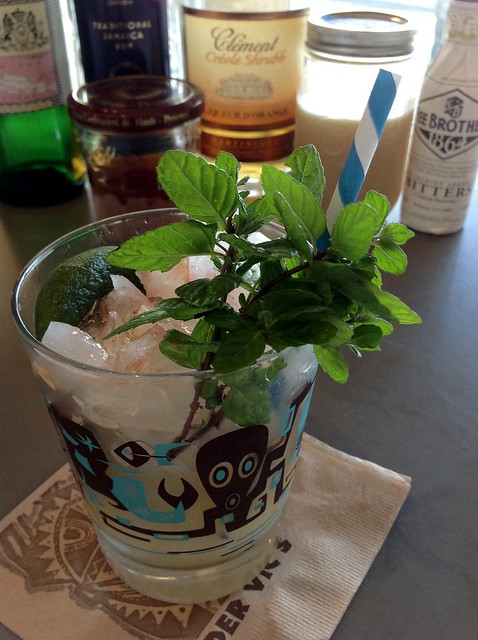 Many thanks to Elana of Stir and Strain for hosting the challenge this month, and to Fred of Cocktail Virgin Slut for keeping MxMo going month after month.