Borough market, London’s oldest market, is located near the London Bridge (that tourists like me often confuse with Tower Bridge, but that’s a different story). It is a covered market packed full of seasonal fruit and vegetables, cheese, meats (including game), fish, and hordes of hungry tourists on a Saturday afternoon. I walked around the stalls for a little while; people where lined up for prepared foods and it was easy to get overwhelmed with all the different options. It might be best to come back early in the morning for a more relaxing experience. In the end, I opted to flee the crowds and walked a few steps to Wright Brothers for a late lunch.

Wright Brothers is a seafood restaurant located near the market. I took a seat at the counter and decided to pass on the oysters this time, and instead started the meal with a plate of devilled whitebait with tartare sauce. Whitebait is one of these Proust madeleines for me; I used to have it all the time when I grew up in France, but it’s not something I see very often in the US, and I had not had it in ages. The plate was generous, and it was a delicious treat to eat these crisp little fish with a wedge of lemon, accompanied by a glass of Yakima red ale on draft. Yakima is brewed by Meantime, a local brewing company located in Greenwich, using five hop varieties from the Yakima valley in Washington state.  The beer was moderately hoppy with a good malt to bitterness balance. It was light and perfect to start my lunch. 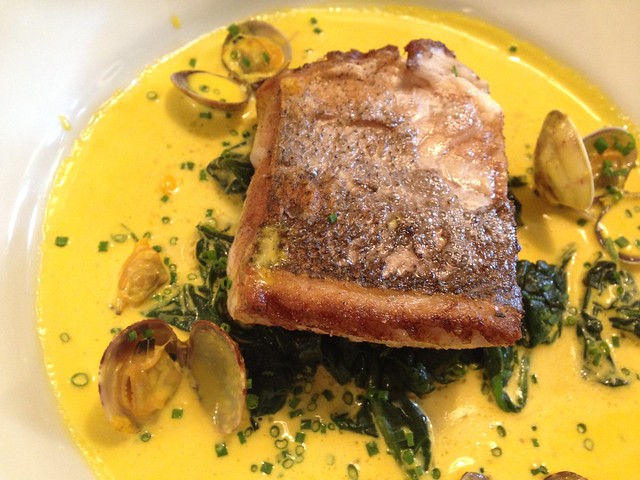 For my main course, I went with the special of the day which was roast hake with spinach, saffron & clams. The fillet of hake had a beautiful crispy skin. The sauce was rich from the cream and delicately flavored with saffron and seafood broth. The clams were succulent; a shame that there were only a few of them! I had a glass of sparkling Nyetimber Classic Cuvée 2009 with my dish. French snob as I am, I had never heard of this sparkling wine from West Sussex until a friend recommended it. It has a nice acidity with notes of citrus and some almond in the finish. I was favorably impressed.

After this restorative lunch, I walked a few steps to the Whisky Exchange under the arches of Vinopolis. I was already familiar with this liquor store and its extensive inventory, a mecca for scotch-lovers. What I did not know is that they offered tastings! I got to try a few new London dry gins and a couple of liqueurs. There is an adjacent space that specializes in wines, and a counter where you can taste them before making a selection. In the end, I got a bottle of bitters made in Scotland by Adam Elmegirab for the Dead Rabbit in New York that are still hard to find in the US, the cardamom-forward Orinoco bitters. A small bottle that made a great souvenir. 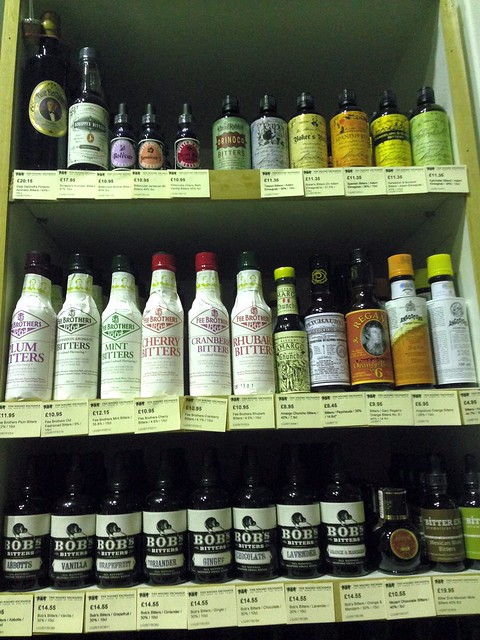 The bitter selection at the Whisky Exchange

Recently I’ve had a chance to spend a bit of time in London, currently one of the most exciting food and drink capitals. This post summarizes part of a trip that took place in April. For Part 1, see here.