Tequila is not a spirit that is very well represented in mixed drinks, and even less so in tiki cocktails. Beachbum Berry’s Total Tiki app includes only 4 tequila recipes out of a total of 238. Two of these recipes mix tequila with rum to great effect.

The first one, Jim’s Special, created at cult tiki bar Tiki-Ti in LA, pairs aged tequila with dark Jamaican rum. Coruba dark Jamaican rum provides body to the drink with plenty of molasses, while the aged tequila (7 Leguas añejo) adds wonderful notes of pepper, cinnamon, honey, and wood. With two such strong elements, you need other standout flavors – passion fruit syrup, orange with curaçao, and lime for acidity. Finally, a touch of orgeat rounds everything out. The resulting cocktail is deep, strong, mysterious, and delicious. 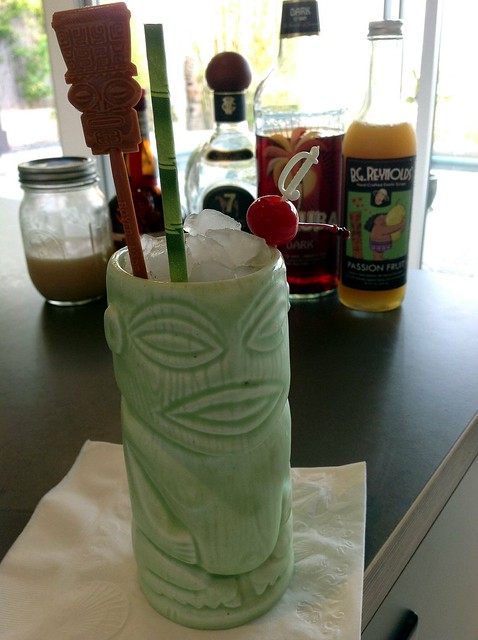 If dark rum and aged tequila work well together, why not experiment with white rum and blanco tequila? The Vicious Virgin #2, which is most certainly not a virgin drink, was created at the Pago Pago in Tucson in the 1960s, according to Jeff Berry. The menu featured a bunch of other “virgin” drinks, the Virgin’s Prayer (I’m guessing, a relative of the Maiden’s Prayer), the Firey (sic) Virgin, etc. The original Vicious Virgin is a Don the Beachcomber creation, named not after one of his lady friends, but most likely after a WWII bomber…

To recreate the Vicious Virgin #2, I used El Dorado 3 demerara for a hint of buttery sweetness, together with 7 Leguas blanco tequila for its strong grassy notes, in a manner not completely dissimilar to a white rhum agricole. The recipe leans in the direction of a (white) Mai Tai with curaçao, lime, and orgeat. Lastly, the grapefruit juice is a stroke of genius because it accentuates the herbal notes from the tequila. Often, cocktail don’t live up to their names, but this one is fabulous and highlights the two base spirits. 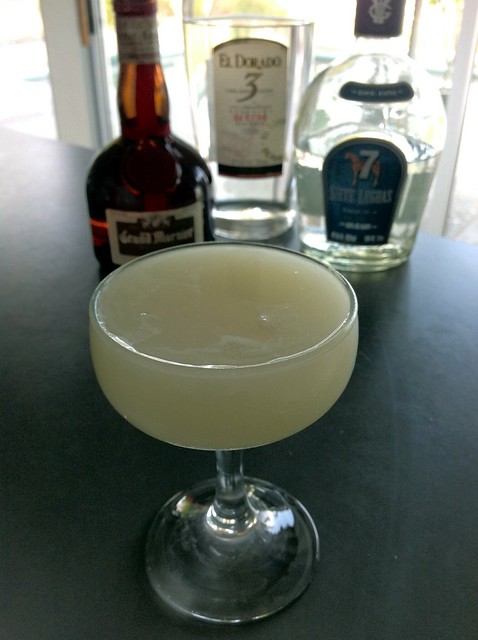 Normally the Vicious Virgin #2 calls for blue curaçao and, although I have a bottle in the back of a cabinet somewhere, it’s best left gathering dust. I used Grand Marnier in both recipes because it’s very similar to a curaçao. Other good orange liqueurs that could work in these drinks are Clement Créole shrubb, Pierre Ferrand dry curaçao, and Cointreau.

If you feel that you really want a blue drink, then I recommend using your favorite orange liqueur and adding some food coloring, rather than using an inferior blue product such as Potter’s for example. Because there would be no sense in using terrific rums and then muddling the end result by using bad quality blue curaçao.

One thought on “Tequila tiki”