Chiltern Firehouse might be one of the most sought-after reservations in London these days. Since it opened a few months ago, it’s been impossible to get in unless you are rich or famous. Try googling the restaurant and you will see the daily log of celebrity visitors (from the past few days: “Rita Ora almost suffers wardrobe malfunction at Chiltern Firehouse” and the very intriguing “Clive Owen is seen arriving at Chiltern Firehouse with two mystery ladies”).

I was interested in trying the restaurant, not for his celebrity clientele but because, believe or not, I really like the food of chef Nuno Mendes, who used to helm the kitchen at Viajante and the Corner Room in Bethnal Green. After corresponding with the restaurant for a few weeks, I finally manage to score a reservation for a week lunch in early August.

Finding the restaurant is not difficult, however its entrance behind a large wooden gate is not so obvious (the security guards in black suits in front of the gates should have been a clue). Past the gate is a very nice outdoor patio. The vibe is very much like celebrity hot spot the Ivy in LA. A little bit of LA in London – not surprising, considering that the owner of Chiltern Firehouse is no other than André Balazs of Chateau Marmont in Hollywood. 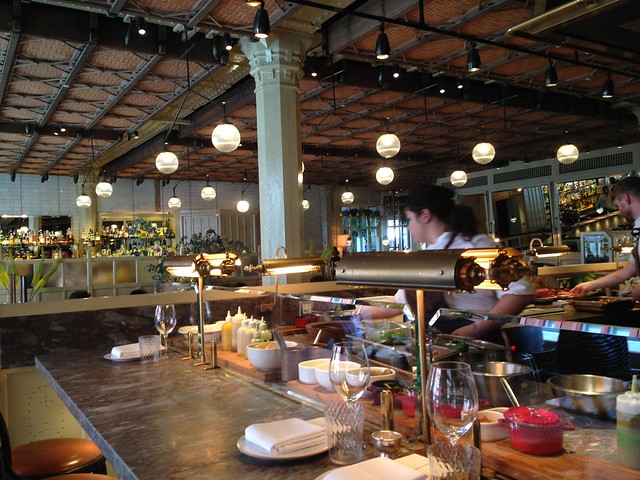 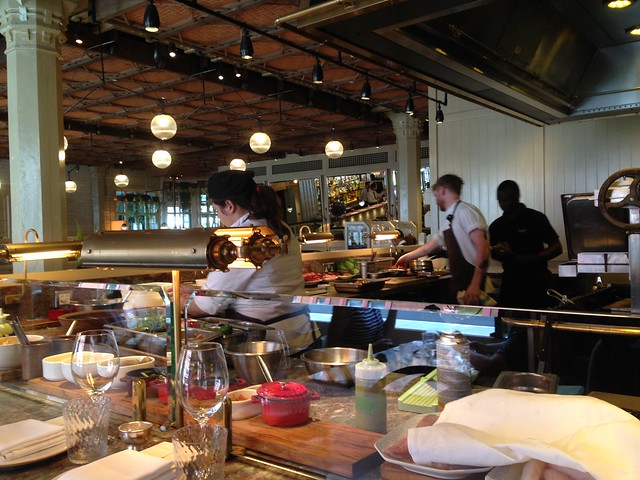 Inside, the restaurant looks like a comfortable and elegant bistro. The bar is one of the stunning elements with its large mirrors, and the elegant bartending crew clad in white suits. The other central element, the kitchen, is open to the dining room. I grabbed one of seats at the counter directly facing the kitchen, and was delighted to realize that the fish station was directly in front of me, and the meat station on the left. 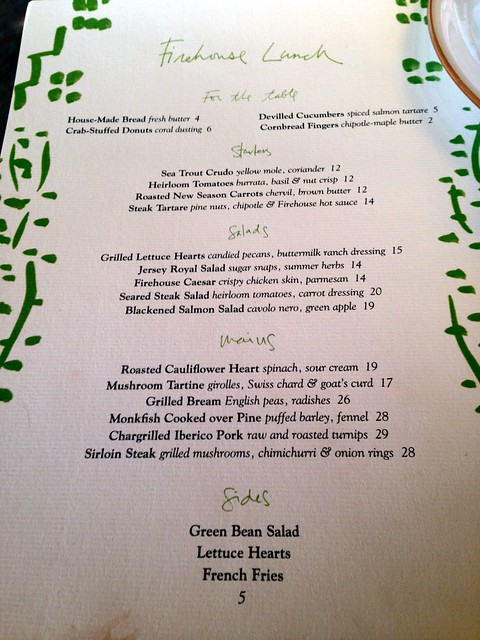 The menu is somewhat limited especially if, like me, you don’t happen to be a big brunch fan. I went with what seemed like the most interesting option for my first course, the sea trout crudo with yellow mole and coriander. I watched as one of the cooks handled the very delicate fish which is similar to salmon, and assembled the dish. The plate was nicely chilled, flavors were clean and fresh with a nice acidity, and the trout roe provided texture contrast and an extra infusion of flavor. A wonderfully refreshing summer dish. 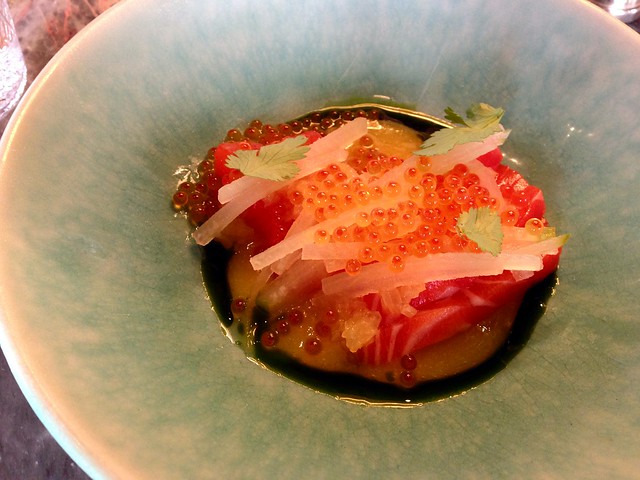 For my main course, I continued with the seafood theme and opted for the sea bream.  The small fillets of fish had been previously cured in a mixture of sea salt and sugar 40:60 for 20 minutes.  I watched as the skin was seared with a small torch, and the fish cooked shortly.  Using a curing step changes the texture of the fish and pre-cooks it; it also allows for a short cooking time that preserves the flavor of the fresh fish. The seabream was served with fresh English peas and an assortment of radishes. 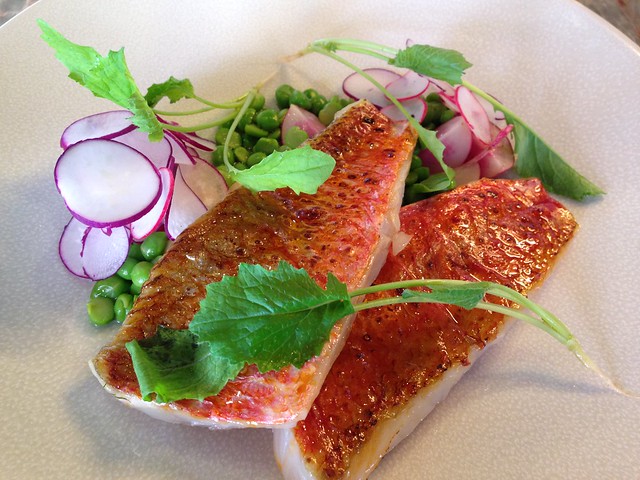 I took a quick look at the dessert menu… 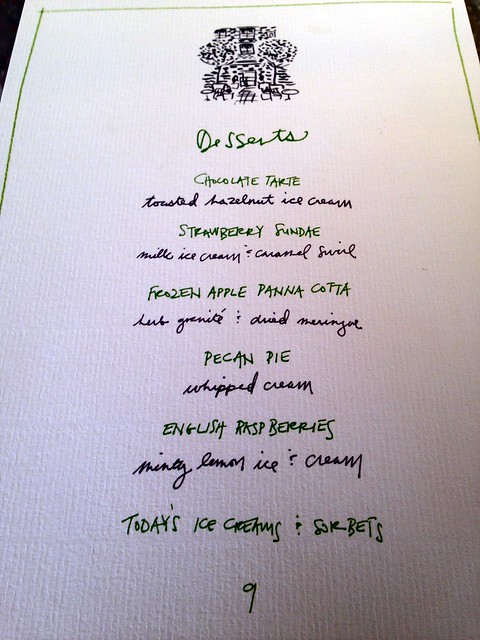 … and decided to pass, knowing that a full dinner was soon to follow that night. Still, I lingered in the restaurant, watching the kitchen in action. There was a cook searing meat for a stew, and beautiful dishes coming out of a wood burning oven in the very back of the restaurant. But my favorite thing had to be the Grillworks grill station, which was especially impressive with its large adjustable cooking surface set up over charcoal. 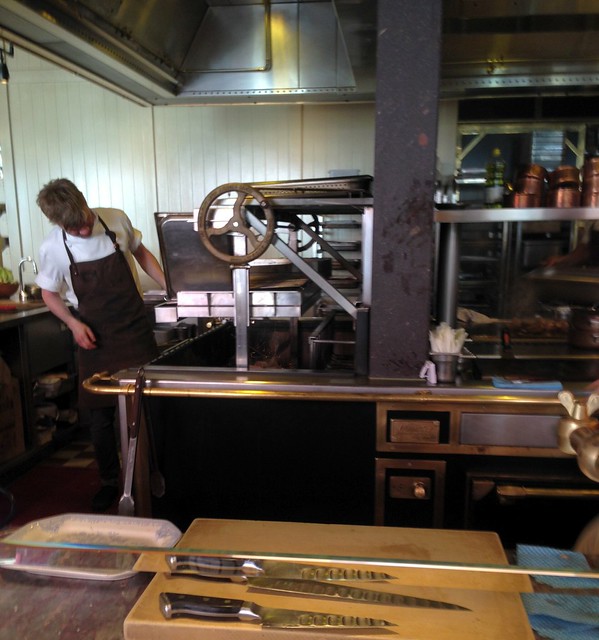 Leaving the restaurant, I realized that Purl was just around the corner. Maybe another time. 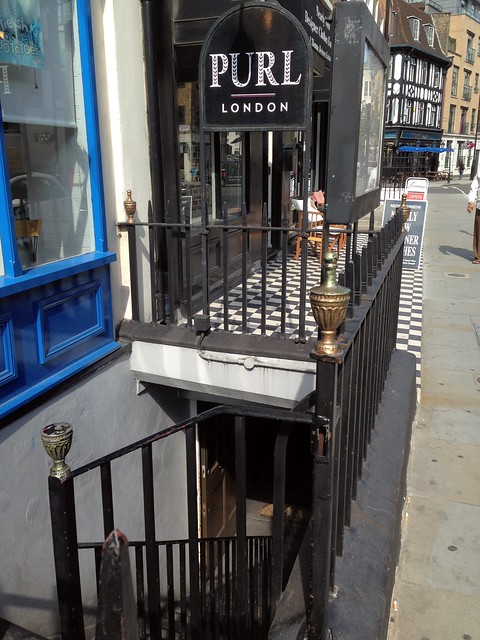 2 thoughts on “All fired up”