Last year when I got a chance to spend time in London, I immediately knew that I wanted to eat at St. John, Fergus Henderson‘s restaurant in Smithfield. It was not because of the huge hype generated by Anthony Bourdain who visited the restaurant in 2001 for his show A Cook’s Tour (this actually was a bit of a concern), it was about the Nose to Tail concept, which is so engrained in my own French culture. There is truly an art in using all the parts of the animal, and making remarkable things out of them. In the US, Chris Consentino did something similar at Incanto (now Porcellino). For me, this is the ultimate type of comfort food, prepared with an expert hand and a lot of attention to detail but done in a rustic, earthy way. 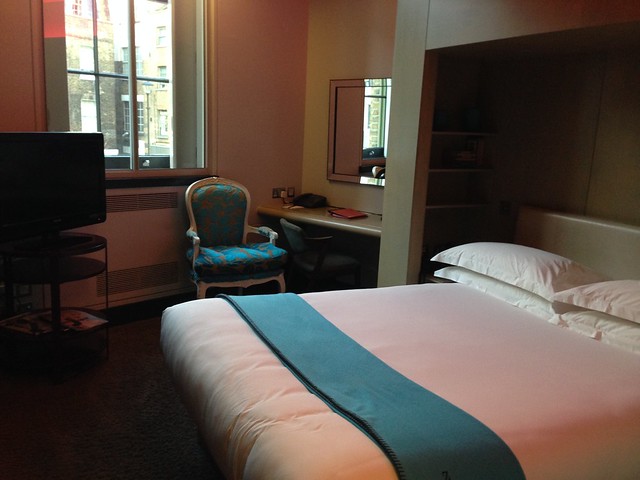 I decided on a hotel based on its proximity to the restaurant – the Zetter in Clerkenwell was ideal, a quirky boutique hotel located within a 5-minute walk, on the other side of St. John’s gate. I checked in fairly late and had barely enough time before dinner to freshen up after a long flight from San Diego. My room was compact but well-appointed, with a great bathroom. It came with a water bottle for the bed, and pink mood lighting… 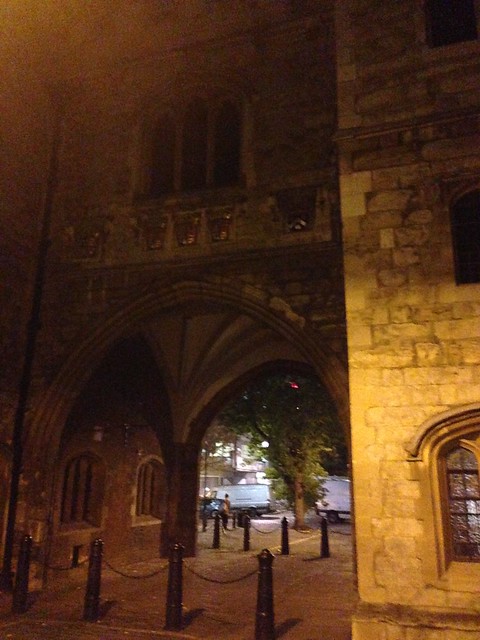 I managed to get lost on my way to the restaurant, and when I finally got to my destination, I wandered a bit inside the “bar” area which is actually a casual open-seating restaurant with a nice selection of small plates, before finally finding the restaurant (you have to walk though the bar area to get to the restaurant which is up a few steps on the right side, across from the bakery counter). 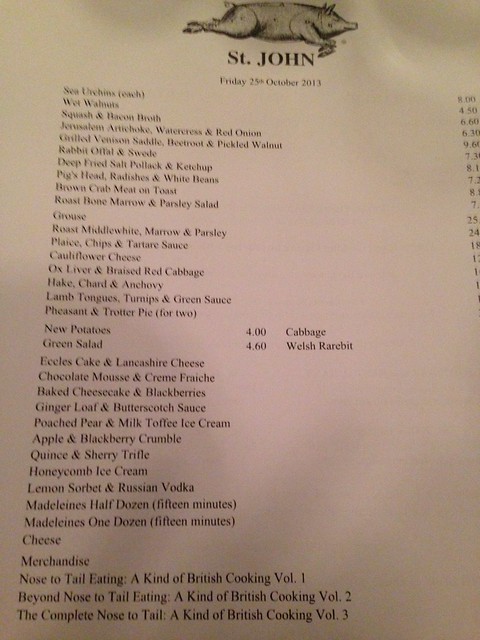 St John’s five rules for success: ‘No music, no art, no garnishes, no flowers, no service charge’

I settled at one of the tables, caught my breath and looked around. The large and open room is quite simple with whitewashed walls, an old wooden floor, simple tables covered in white tablecloths. The kitchen is semi-open and the atmosphere very much on the casual side. The service is warm and friendly, extremely attentive. I had already a fairly good idea of the menu, which changes daily, thanks to chef Ludovic Lefebvre who had visited the restaurant just a few days earlier and shared a photo. 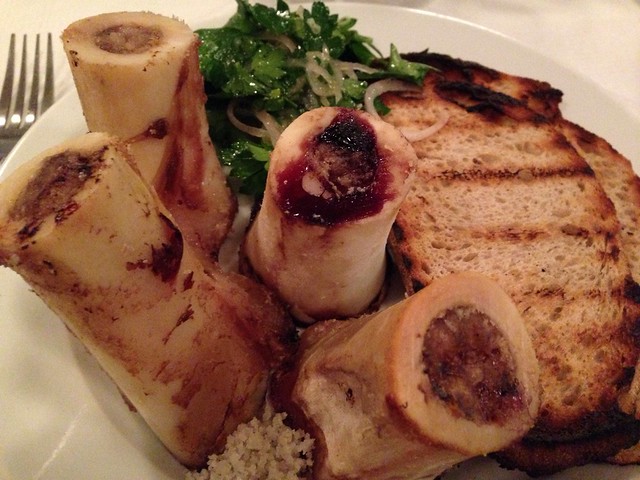 Of course I had to start with the roasted bone marrow, because it’s something that I love, and one of the restaurant’s iconic dishes. Roasted bone marrow on toast is a staple of French bistros; St. John serves it with a little herb salad with parsley, shallots and capers that is a great touch. Coarse grey sea salt on the side, as is typical in France. You can’t help but feel like a glutton while devouring this dish with your hands, the bone marrow melting on the bread and dripping on your fingers. Pure bliss. 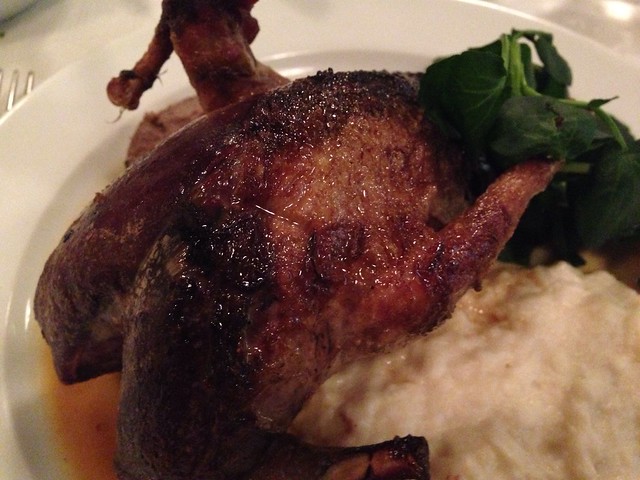 For my main course, I went with the grouse. You have to understand that we are completely game-meat deprived in Southern California. I don’t know any hunters, and the game meat I have access to is actually farmed, not wild, due to various regulations it would take too long to go into (there is such a thing as “farmed” game meat, and it tastes very bland compared to the real thing). So I only have proper game meat when I am in Europe and have a rule of always ordering it when I see it on the menu (that and offal – which can make the choice a little difficult at St. John given that both are their specialty).

Grouse is a wild bird that is found mostly in Scotland and Northern England. It was cooked rare, had red flesh that was a little firm, and tasted like pheasant should but rarely does – irony, slightly sweet, with a tinge of bitterness. 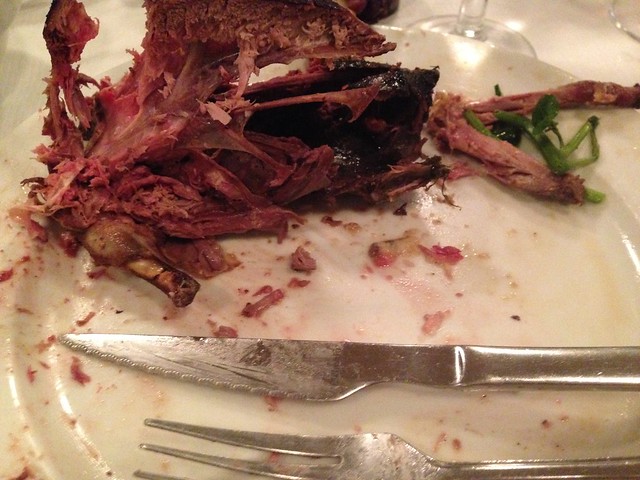 Eating the whole bird required a bit of effort and dexterity, but I think I did a pretty good job. I decided to skip dessert, as I had to get ready for my next activities that evening.

But wait – we are not done yet! I had made reservations for St. John for Friday and Saturday nights, not knowing how my schedule was going to turn out. Based on that first experience at St. John, I decided to go back the next day… I was greeted by the staff who recognized me and made me feel like a regular already, which was great. 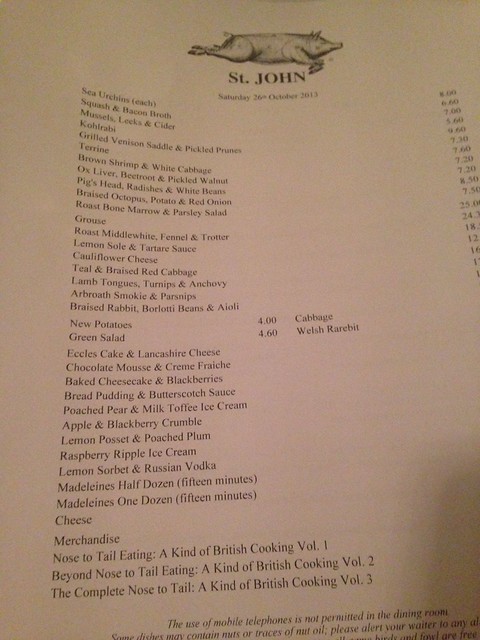 On that second night, the menu had changed a little. I was tempted to have some bone marrow again, although I opted to explore the rest of the menu. I went with a grilled venison saddle for my starter. It was served with pickled prunes, and was one of the most delicate and tender meats I’ve ever eaten. 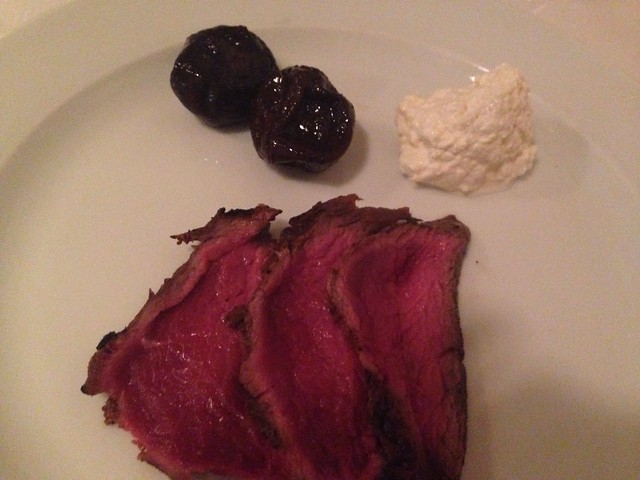 The grouse was still on the menu, but there was also teal with braised red cabbage. Once I realized that teal is a small duck (sarcelle in French), my choice was made. Duck is one of my favorite meats, and I had never tried teal, so this was my chance.

The whole duck was presented to me, juicy and tender. To top things off, under the duck was a little piece of toast with the liver, as a surprise. That was my dessert that night (although, now that I think about it, I also has a lemon posset as a proper dessert, but it was fairly unremarkable and I forgot to take a photo). 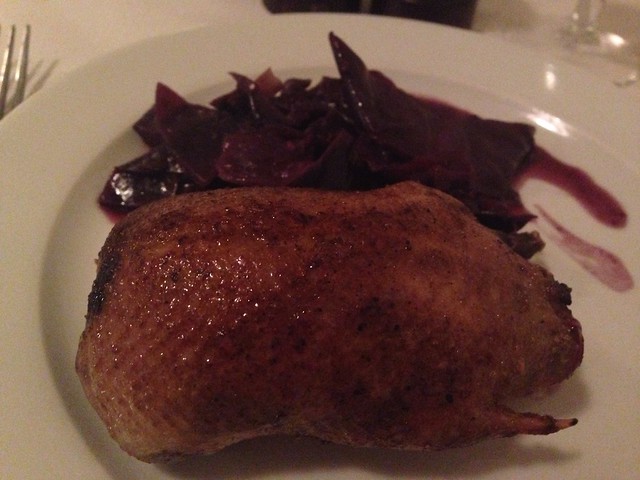