Jason Littrell’s Almond Brother in the Death & Co Cocktail Book has good things going for it. The combination of a base spirit (aged tequila) with lime and orgeat reminds me of one of my favorite drinks, the Army & Navy. Also I happen to have obscene amounts of coconut orgeat that I made a few weeks ago and love using whenever I have a chance to. Its coconut flavor is subtle enough that it works well in cocktails calling for regular almond orgeat, while adding something a bit different.

The cocktail ingredients also include apricot liqueur and amaretto, which gave me pause and some concern (I use amaretto very rarely, and am not a big fan of apricot liqueur in general). Add maple syrup to the mix, and I was really skeptical. Too much going on on the sweet end of things, maybe? So I ended up only mixing a 1/2 size cocktail, which is my typical procedure for testing new cocktails I am not sure about.

I was so terrified that this might be too sweet that I reduced all the sweet elements very slightly. But it was fine in the end. It felt like a fancy version of Tommy’s “Margarita” (which is really a tequila sour). It worked great with the aged tequila, and I noticed that the pepper notes in the Siete Leguas añejo were highlighted by contrast with the other ingredients. 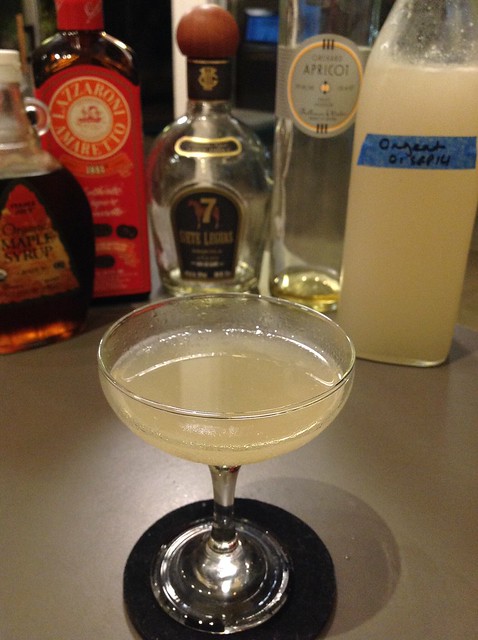 to a shaker add

strain into a chilled coupe