The Clove Club started as a pop-up restaurant a few years ago in London. It soon gathered a following, which allowed it to use crowdfunding to open as a regular restaurant in 2013. It was awarded one Michelin star since my visit in August.

The restaurant is located inside the former town hall building in Shoreditch. Immediately after the entrance, a converted closet full of charcuterie made on the premises is an auspicious sign.

You go through a first room where a central bar area is located, and make your way to the slightly more formal dining area which has a completely open kitchen. Unlike the opulent building, the decor is simple and, should we say, a little sparse – white walls, wooden tables and floors, no tablecloths. 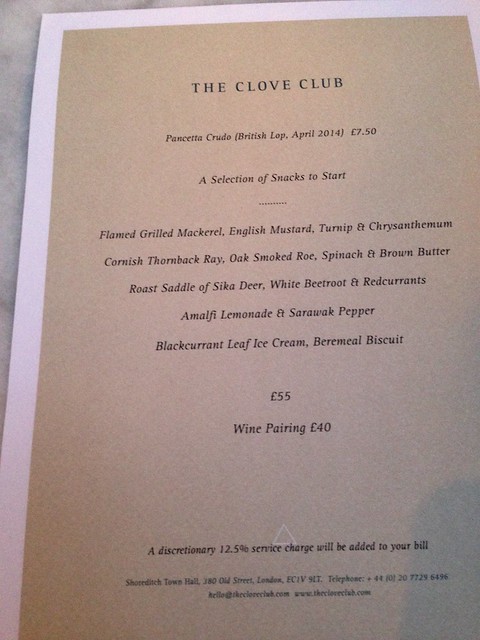 There is only one option for dinner and it’s a 5-course tasting menu (3 savory, 2 sweet). In addition to what is listed on the menu, there are a lot of little surprises along the way, so dinner was a pretty extensive series of dishes. To be honest, I could have done without a few that I did not find especially memorable. For example, their signature buttermilk fried chicken which is served on a bed of pine needles. The concept is great, and although the chicken was deliciously tender and moist, its crust was soggy. But there were many dishes that were really fantastic and even inspiring. 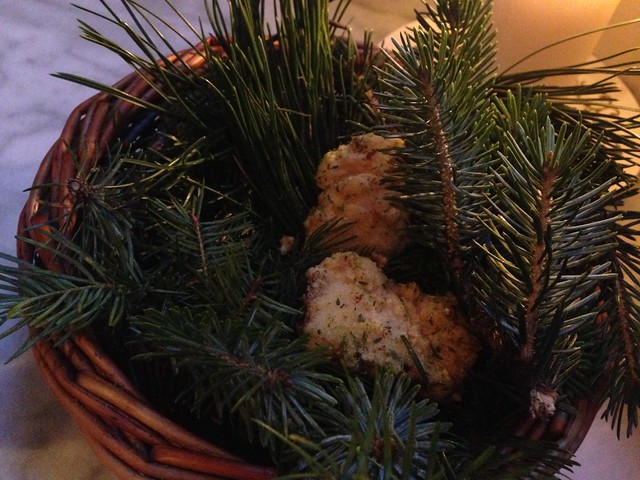 The style is British cuisine with local seasonal ingredients. There is a lack of pretension and a high level of skill. The technique is there but is not the focus of attention; rather, it’s on the ingredients and presenting them at their best. 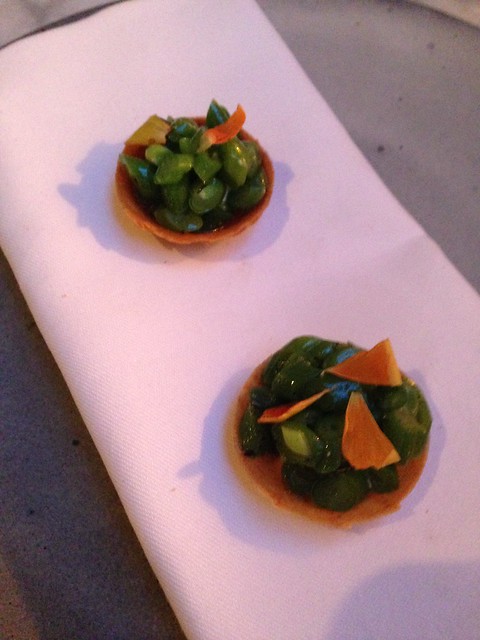 The next small nibble, smoked cod roe over rye crackers, was even more delicious. Too bad it was brought at the same time as the house made wood-pigeon sausage with greenage ketchup, which felt a little pedestrian in contrast. I would have much rather tried a few slices of the cured meats that we had seen hanging by the entrance (I guessed I should have spent the extra £7.50 for the pancetta crudo!). 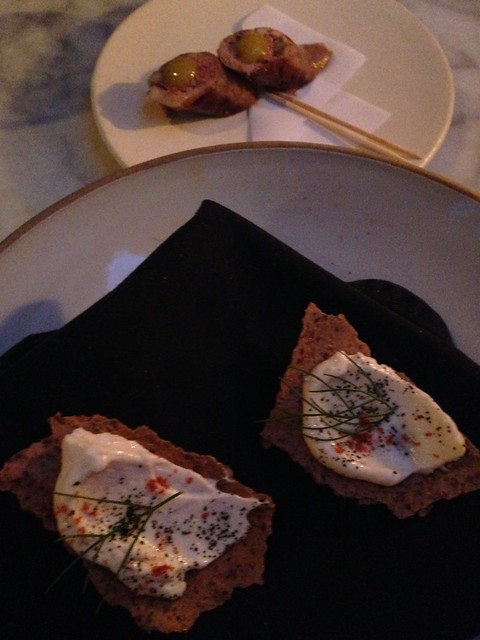 Next, the dishes announced on the menu started rolling in. First, mackerel with turnip and English mustard. 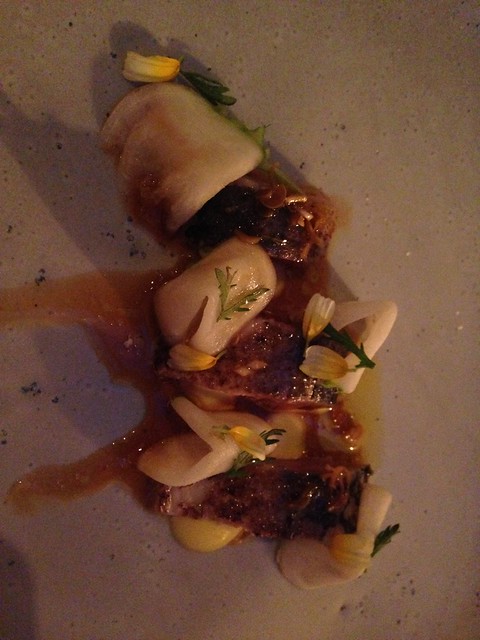 Then the Cornish thornback ray which was truly beautiful, served with a traditional brown butter and more of the smoked cod roe (no complaints!). Spinach and small pillows of soufflé potatoes on the side. 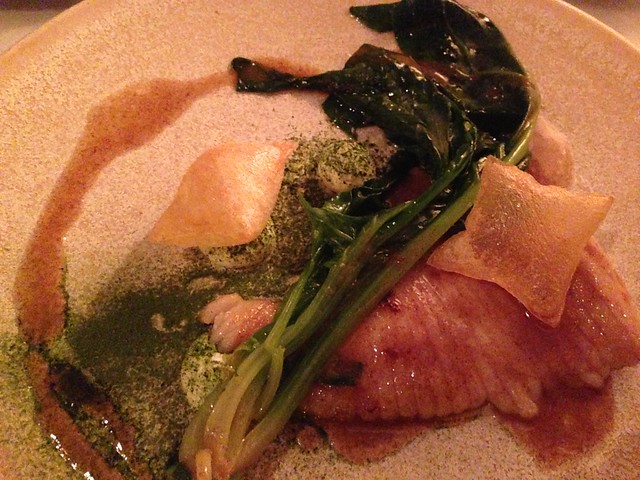 The meat course was also wonderful – a delicate saddle of sika deer cooked to perfection and simply accented with tart redcurrants and white beets for a touch of earthiness. At that point I was very happy with my meal. 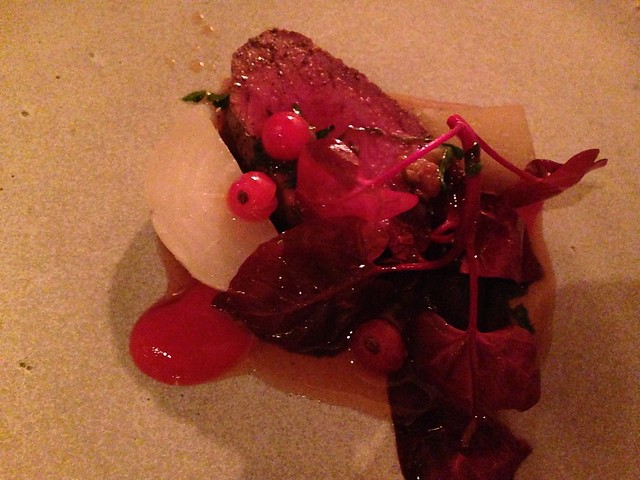 A consommé of duck served in a glass rinsed with madeira was served as a transitional dish, to make room for the rest of the meal.

The first dessert, a posset of Amalfi lemons, had the quality of being refreshing. However it was not especially good-looking, and was disproportionately large. The fact that is seemed one-note did not motivate me to finish it (I think I may have missed the pepper which was hidden in ice cream form at the bottom of the bowl, because I gave up before finding it). 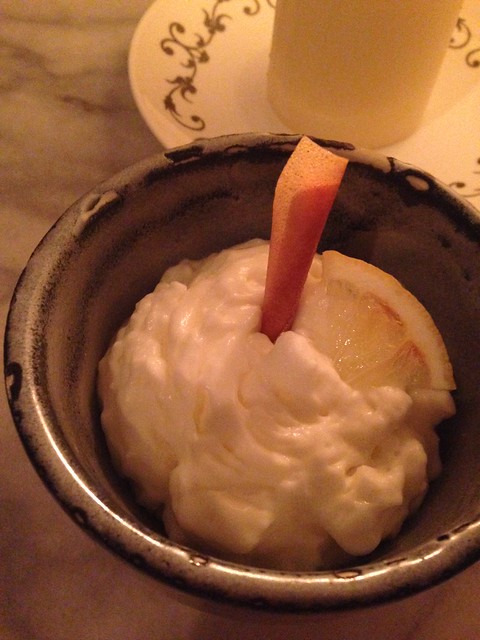 I much preferred the second dessert, blackcurrant leaf ice cream with beremeal biscuits, which brought back childhood memories of picking up these little berries to make preserves. The leaves had none of the aggressive tannic flavor of the berries, just their wonderful floral aroma. 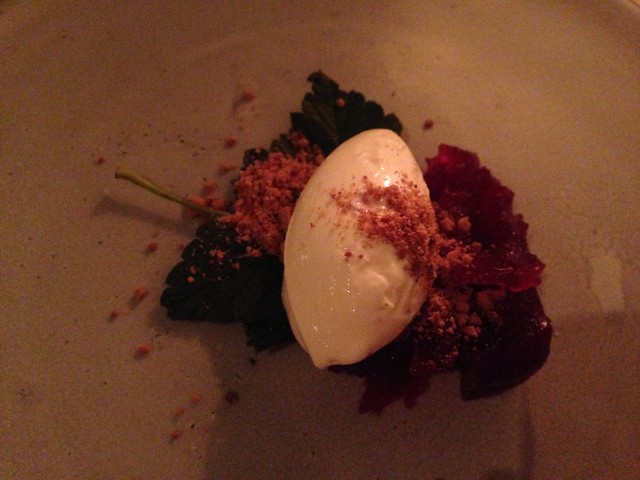 Finally, Fernet-Branca and crème de menthe bonbons (inspired by Fergus Henderson) were brought to the table with barley cakes. Being a Fernet fan, this was a perfect ending to the meal. There was also a small bar of dark chocolate that was enjoyed the next morning. 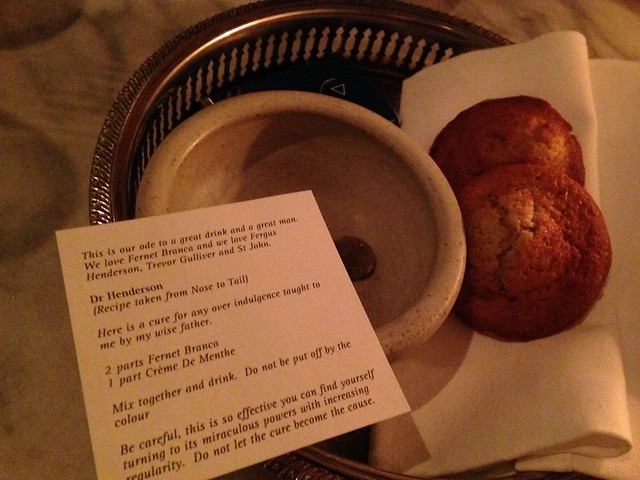 On my way out, I was a bit startled to see not only chef Isaac McHale by the bar area, but also Nuno Mendes of Chiltern Firehouse who was apparently paying a visit that night… small world.