Like a lot of my cocktailian friends, the Aviation is one of the drinks that really got me into cocktails a while back. Lured by the appeal of a cocktail with a beautiful pale blue hue, for months (years?) I looked for that elusive bottle of violet liqueur. When I finally put my hands on one, the Aviation became my go-to cocktail for a while and was what I would serve to my friends at cocktail parties. I loved how refreshing and interesting it was, despite having only a few ingredients. 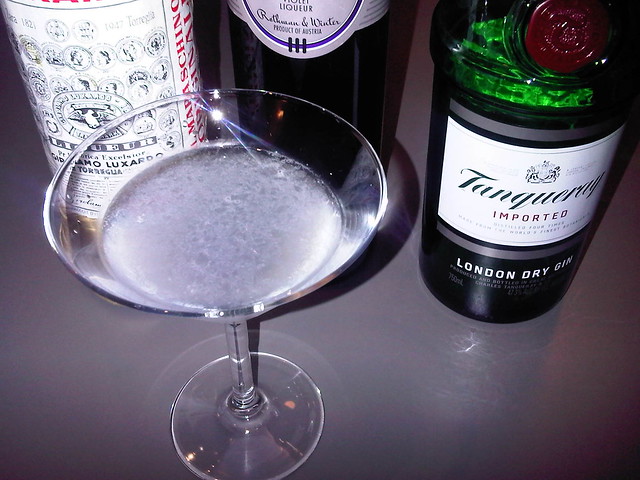 END_OF_DOCUMENT_TOKEN_TO_BE_REPLACED

Erik Ellestad of the Savoy Stomp blog has been taking his Savoy Nights on the road and did one at the Eveleigh in LA a few months ago. Sadly, he did not make it down to San Diego (maybe another time?). I am still recovering from my disappointment… Anyway, I’ve been keeping an eye on these events to see what he is mixing.

This cocktail may not have been included on the menu that night, but it’s one that Erik mentioned as being amongst his favorite Savoy cocktails. The Imperial Cocktail is a recipe that actually predates Harry Craddock. I found it in Hugo Ensslin’s Recipes for Mixed Drinks (1917) and also in Tim Daly’s Bartender’s Encyclopedia (1903) (as pointed out by cocktail101).

END_OF_DOCUMENT_TOKEN_TO_BE_REPLACED

After Fire! in August which gave me an excuse to make a classic tiki Volcano Bowl, this month’s Mixology Monday challenge was Smoke!, the theme picked by Elana of the Stir and Strain blog.

When considering smoke, two ingredients came to my mind immediately: mezcal and Laphroaig. I decided to focus on Laphroaig as I don’t use it very often. I bought a bottle after falling in love with Sam Ross’s Penicillin, a new classic that pairs blended scotch with ginger, lemon, and a touch of smoke from the Laphroaig. Sam seems to play with Laphroaig quite a bit; his Fitzroy is a great Rob Roy variation where Laphroaig makes a great impact.

END_OF_DOCUMENT_TOKEN_TO_BE_REPLACED

Sometimes it’s the middle of an already long week and you feel tired. You need a pre-dinner cocktail but you don’t have any desire to press citrus, prepare elaborate syrups, or measure complicated ratios. beta cocktails, the little cocktail booklet published by Kirk Estopinal and Maksym Pazuniak (Maks) in 2011, has a lot of cocktails with unusual and bold flavor profiles. Fatigue, an equal parts cocktail, was designed for bartenders suffering from palate fatigue after a long shift.