Part One – The Dude, PDT and Café Arroz

I love horchata, the white cooling drink that seems ubiquitous in farmers’ markets in Southern California where I live, and is of course a staple in Mexico. It’s fresh and slightly rich and creamy, with a little bit of spice from cinnamon.

The first time I made horchata at home was actually for a cocktail recipe! I had spotted the Café Arroz, a long drink made with aged tequila as the base, coffee liqueur, and horchata, in the PDT Cocktail Book. It is a Mexican & non-dairy take on the classic White Russian (vodka, Kahlua, milk).

I am not especially a fan of Caucasians, I mean White Russians, but liked the idea of a tequila and horchata drink, so I decided to try it.

Highlights of the PDT horchata recipe:

This is an all-rice recipe, and I remember not being too crazy about the texture which was on the chalky side, and overall thought that it was a bit lacking in flavor. It tasted a bit thin and wasn’t very sweet.

It made a pretty good drink however… It didn’t hurt that, instead of using Kahlua, I went with the delicious House Sprits coffee liqueur (it is a bit hard to find but tastes absolutely fantastic, the best coffee liqueur I’ve ever had). 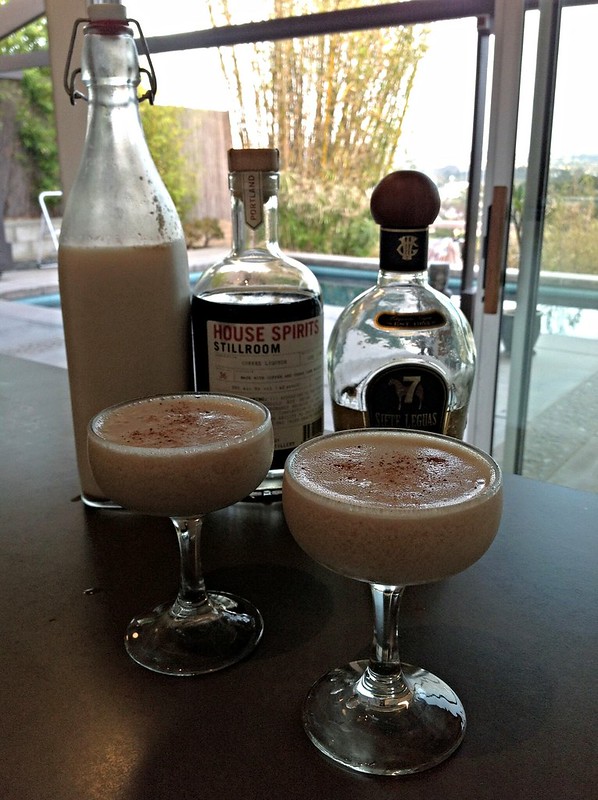 The second time I made horchata, I used another cocktail-related source, no other than Jeff Morgenthaler, the 2016 American bartender of the year at TOTC.

I liked that he had a few guiding principles when developing his recipe:

As a result, he doesn’t use milk and therefore the horchata is less prone to spoilage. I think that’s great because that’s one less thing to worry about if you take your horchata to a picnic.

(As a side note, at the farmers markets where I often buy a cup of horchata, it’s kept in a giant container – large plastic barrels also used for aguas frescas, at ambient temperature, and served on ice. It doesn’t contain milk. Adding milk might be good for texture but creates storage issues and also defeats the purpose of a drink that is more or less a milk substitute. Typically, horchata doesn’t contain almonds either. Just rice, water, cinnamon, (lots of) sugar as one of the vendors told me; it is quite simple.)

Horchata and a tamale at the farmers’ market

*He says to use the softer Ceylon cinnamon and not the super hard cassia bark that you see everywhere. I think that’s great advice. It tastes a lot fresher when you grind your own of course but almost all the recipes call for already ground cinnamon.

**Here he specifies to use a “nut milk bag“. I remembered another one of my virtual cocktail friends mentioning such a contraption. The thing always sounded super weird to me and I never researched it. Anyway, when I made Morgenthaler’s recipe I didn’t have a nut bag and used the same metal strainer + nylon cheesecloth combination I had used before. But I decided to investigate the mysterious nut bag everyone seemed to rave about for future experiments.

***This dude seems to have somewhat of a sweet tooth. I can’t say I am shocked because his cocktail recipes tend to be on the sweet side as well. I reduced the amount to about half.

The result was good but a bit basic (…). I thought it was somewhat lacking in richness, but it was solid, and I liked how easy it was to make (except for the straining which is messy when you don’t have the famous nut bag!).

Part Three – A serious recipe and upgrading to a nut bag

After this, I had to go in the opposite direction. I picked a recipe that seemed quite rich with both milk and almonds! This is the recipe from Kenji López-Alt in Serious Eats, so I knew this would be a reliable/tested method.

With the almonds, the recipe just specifies blanched almonds. Some recipes toast them first. I used roasted blanched & sliced almonds from TJ’s that are a little more flavorful/nutty than regular blanched almonds. It’s all a matter of personal preference/mood. In orgeat, I prefer untoasted almonds to have a taste that is as close as possible to a fresh almond.

By then I had finally acquired a nut bag (about $10 on amazon). And I have to say, the stuff really changed my life .  Not only does it make the straining process so much easier (the bag has a little drawstring so you close it once everything has been poured inside, and then you can press without worrying that things are going to fall out of the cheesecloth), but it is also fabulous for making cheese like fresh ricotta.

This is a very creamy very rich horchata. Honestly I am not crazy about the milk in it. There is just too much of it, it practically tastes like almond-flavored milk. However the almonds are great. Of course with the almonds, the drink is very reminiscent of one of my favorite things, orgeat.

Putting it all together… Here is my current favorite recipe.

This is a bit concentrated but this amount fits in my blender exactly. I feel that 1 to 2 more cups of water could be added. One solution is to add it when the final drink is dispensed and store the “concentrated” horchata in the fridge.

… and after it’s been strained and dispensed. 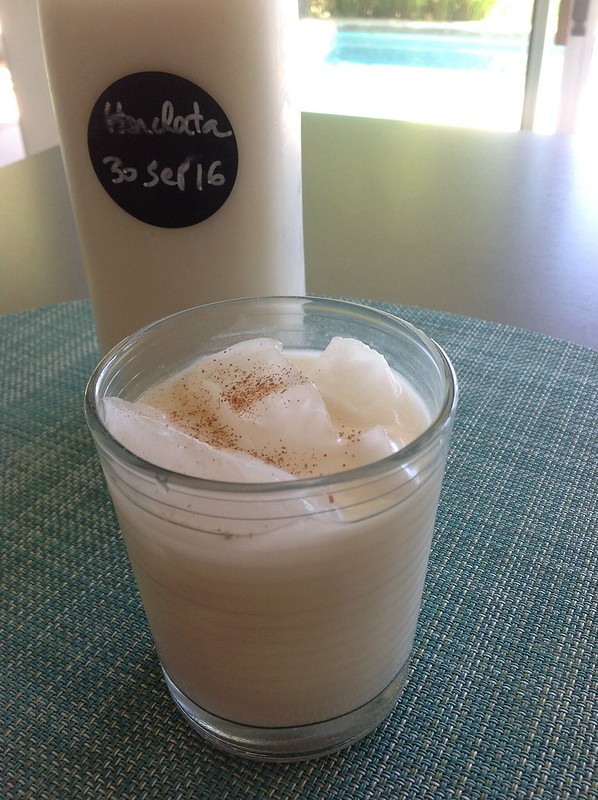 A cool twist that I discovered when making a new batch because I was a bit low on almonds is to replace part of the almonds with shredded coconut. It’s quite delicious!

So it’s hot and you are craving something refreshing. You also feel like something energizing, like coffee. Like to make an iced latte, you grab a tall glass, fill it with ice cubes. Then, instead of pouring some milk, you pour your fresh horchata, followed by a shot of espresso… Delicious. 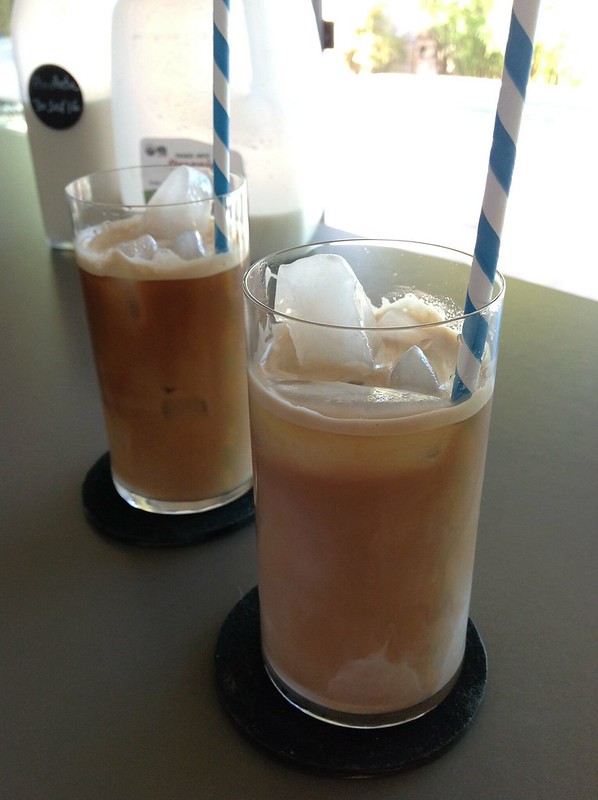 I’ve made horchata with the rice I normally have in my pantry, which is Trader Joe’s white basmati rice. But I was wondering if there was a type of rice that was favored in horchata? Most recipes specify “long grain white rice” and that’s about it. I’ve seen people mention brown rice, which seems like an interesting twist, but I am mostly interested in white rice varieties. That might be something worth exploring.

The horchata at the farmers’ market seems to be mysteriously stable, whereas mine always settles with the fine solids migrating to the bottom of the bottle (or glass) over time. A quick shake fixes the issue, but I am very curious as to how you can avoid this sedimentation. I am wondering if it’s because the solids are significantly smaller in size (because they use a finer filter for example), or because they add something to keep everything suspended.

I wonder what happens if you use rice flour instead of rice to make horchata?