After the Negroni, the Daiquiri is probably my favorite cocktail. This seemingly simple drink – rum, lime juice, sugar – is refreshingly sublime when made with a good rum. Actually, this is an excellent test for any rum – if it doesn’t make a beautiful Daiquiri, then maybe something is wrong with it… 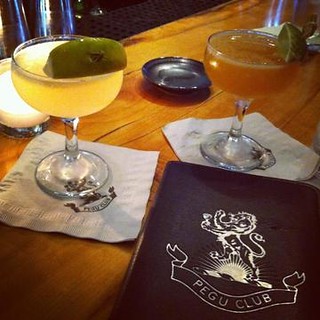 A rhum agricole Daiquiri (and a Pegu Club) at Pegu Club

This post is devoted to Daiquiri variations that use rum as the base, with a little bit of this or that added.

So simple and so delicious. It really highlights the flavor of the rum.

On the thread about honey in mixed drinks, I discussed the Brooklynite, a daiquiri with dark rum, honey syrup, and Angostura bitters.

Another daiquiri variation that I tried last week for the first time is the Daiquiri no. 2. It’s a classic daiquiri (white rum, lime juice, simple syrup) with a barspoon each of orange juice and curaçao.

I broke open my new bottle of Pierre Ferrand dry curaçao for the occasion. Compared to Cointreau, it is drier and has a more complex aroma (heavy on the peel) – really nice. I can’t wait to use it in a Mai Tai.

I am not a huge fan of orange juice in cocktails and like blood oranges much better, so that’s what I used. To me, they have a berry flavor that comes out in the finish and is very pleasant. Plus I love the color.

Hemingway Daiquiri for me last night.

It felt great, especially after having a particularly bad one at a bar not too long ago (I suspect their grapefruit juice was stale, because their second attempt was not much better than the first).

It is my favorite way to enjoy a good unaged rhum agricole. La Favorite has a very distinctive grassy/funky flavor that is wonderful in this drink. I never get tired of it.

Daiquiri Naturale again, this time with a newly acquired bottle of J.M white rhum agricole. I could not resist – it was only $26 at my local Bristol Farms.

A couple of drinks with orgeat, inspired by the 7 daiquiris in 7 days from The Mix Lab.

First, the Look Normal by Rumdood. White rum (I used Flor de Caña) and lime juice sweetened with orgeat, maraschino, simple syrup and absinthe (I used pastis). It’s reminiscent of the Hemingway Daiquiri with a kick from the absinthe (I had reduced the amount from 2 to 1 tsp). The orgeat mellows the flavors so it’s quite mild and refreshing.

The second drink was the Freshman Daiquiri by Theo Lieberman. White rum, lime juice, orgeat, falernum, orange slices. I think this was our favorite. The combo of orgeat + orange + falernum is a great one.

Last night I tried the Rum Crawl (rum & lime sweetened with ginger syrup and falernum + whiskey-barrel aged bitters), a creation from Bourbon & Branch in San Francisco that was documented in a blog post by Dave Stolte/Home Bar Basics.

It reminded me of the Captain’s Blood, another great drink that I mentioned upthread, with an additional layer of flavor imparted by the ginger syrup and falernum. I used Canton ginger liqueur and store-bought falernum, but I would love to make my own falernum at some point. The rum was Appleton 12-year old. 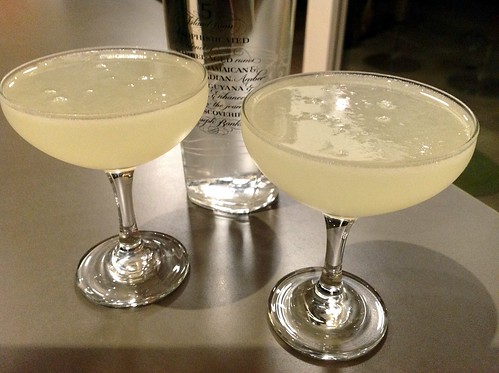 The Hotel Nacional, a Daiquiri variation from the namesake hotel in Cuba, made with the ratios from PDT. It’s a daiquiri with aged rum (PDT lists Ron Pompero Aniversario; I used Plantation Barbados 5 year which is another nice sipping rum), pineapple juice and apricot liqueur, in addition to lime and simple syrup. I initially forgot the simple syrup and added it later, but honestly I don’t feel that it was really need with the sweetness already imparted by the pineapple and the apricot liqueur.

It is a pleasant “beginner” daiquiri; with the rum I used it had undertones of coconut. I still much prefer the crispness of a regular daiquiri.

After an unremarkable daiquiri from the PDT cocktail book (see the Hotel Nacional above), I tried the Winter Daiquiri from the current issue of Imbibe Magazine. I was a little nervous to use vanilla syrup thinking that it would be another overly sweet daiquiri.

Lovely spice and the balance is right, the vanilla is there as an undertone but does not overwhelm the drink. Very well done. 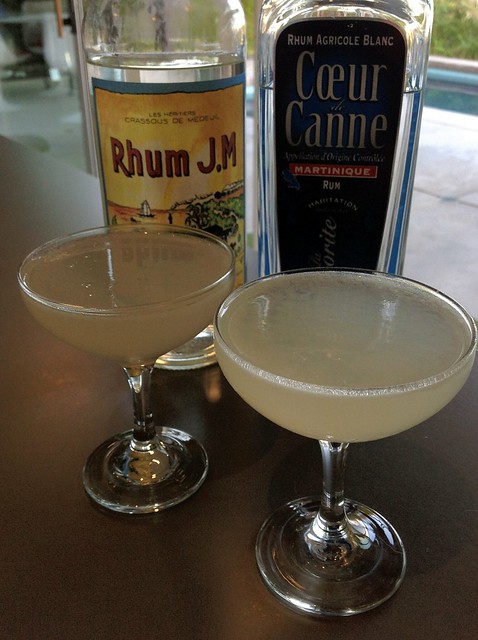 PDT version [on the left]

The Navy Dock Daiquiri, found on cocktail virgin slut blog. The flavor profile is very Cynar-forward so this is definitely a stretch from a classic Daiquiri.

Oil and smoke in a daiquiri base, with bonus funk from the maraschino.

Daiquiri with rhum J.M and J.M cane syrup. I think I actually prefer a sugar syrup in my Daiquiris. 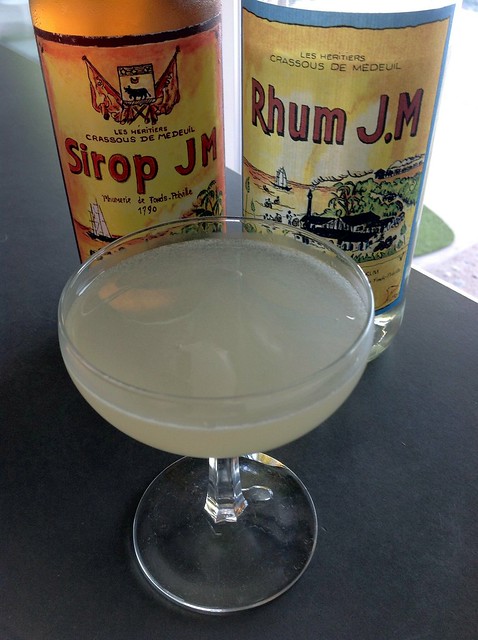 The Cloak and Dagger, a Daiquiri with a mix of rums. The recipe in the Bartender’s Choice app called for Gosling + aged rum. I went with Coruba dark Jamaican rum and Flor de Cana 4 year extra dry rum. Simple but to the point.

Last night I tried the Oh Gosh from Tony Conigliaro’s Cocktail Lab with aged white rum, triple sec, lime juice, simple syrup. It’s an orange-flavored Daiquiri, a bit similar to the Daiquiri No. 2. The cocktail is well balanced but I struggled a bit with the large amount of triple sec. I still prefer a classic Daiquiri. In any case, it went down very easily. 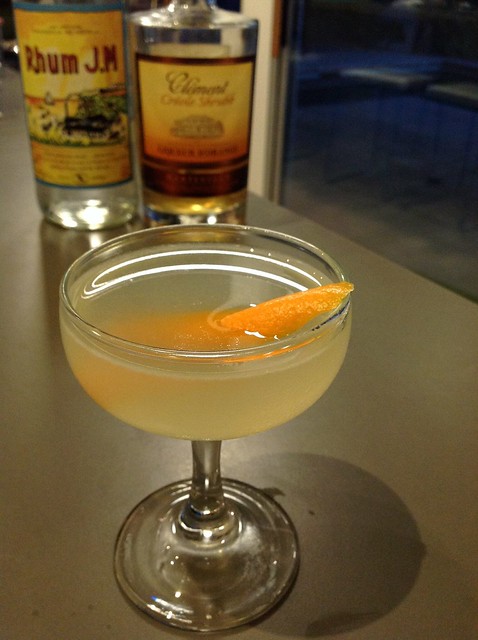 Daiquiri (Difford’s ratio) with El Dorado Demerara rum (3 years). This rather is rather sweet and doesn’t pop as much as I would like in a Daiquiri. 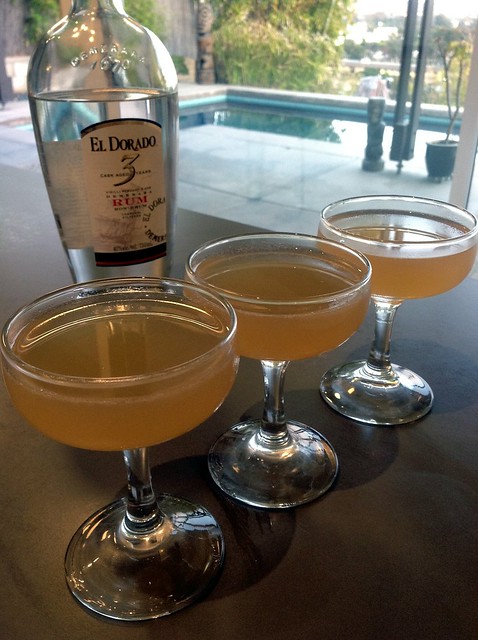 Either my taste buds have evolved, or I have finally seen the light. But I have now officially switched to the Difford’s 10:3:2 ratio for my Daiquiris (I omit the chilled water, and make sure to stay away from Bacardi though!). I’ve even done a side-by-side to be absolutely sure, and they are indeed better this way, with the rum front and center. The only drawback is that, with my American jigger, the measurements end up being awkward with 2 oz rum, 0.6 oz lime, 0.4 oz 2:1 syrup. (I am aiming for a total of 3 oz.) Maybe just up the rum to 2.5 oz and use bigger glasses next time…

Side-by-side with the Bartender’s Choice version.

The Difford’s ratio has the advantage of using less lime juice, which is very appropriate given the lime shortage in the US!

This rum passes the Daiquiri test with flying colors. 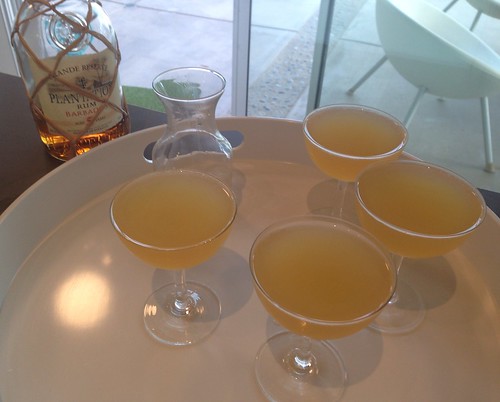 Tom Walker’s Maid in Cuba last night, as a nod to his win in the Bacardy Legacy Competition.

I want to say that the flavor of this rum is not very far apart from Flor de Caña, maybe a little fuller/richer when the FdC is a bit more grassy/coconut-y, although I no longer have a bottle of FdC to compare against. 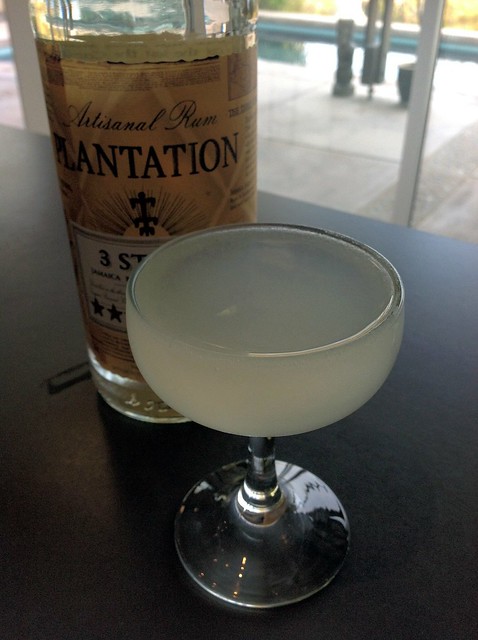 I had a Daiquiri with Neisson blanc a couple of days ago. Difford’s 10:3:2 ratio. That might be perfection.

A bloody Daiquiri, why not. Benjamin Barker Daiquiri by Brian Miller with aged rum (El Dorado 8), lime juice, Campari, demerara syrup, absinthe (St. George). Pretty well done because the Campari blends harmoniously and does not become obvious until the end. A good option for an aged rum Daiquiri with a slightly bitter finish.

Here is a 10:3:2 Daiquiri with La Favorite from this weekend. No surprise here, I am still a huge fan. As a side benefit, the rhum starts releasing its fragrance as soon as you open the bottle, and perfumes the whole room by the time the drink is ready.

I was reading the chapter on citrus in Morgenthaler’s book, saw the photo of the Daiquiri No. 3 (aka Hemingway Daiquiri), and had to have one immediately. I used his ratios.

First with Plantation 3 Stars; just the rich touch of grassy sugar cane. Then with El Dorado 3 for a richer, almost buttery version.

I forgot to post this nice Daiquiri variation a while back, Phil Ward’s DWB. It’s a white rhum agricole Daiquiri with a touch of Batavia Arrack. What I found exciting was the combination of the funk from the rhum agricole and the batavia arrack. It’s not something I had experienced before.I would not mind having one now.

I made a coconut orgeat last weekend and used it in a Daiquiri variation. It needs some tweaking but it has potential. The orgeat is fabulous in water – instant coconut water. I am enjoying some right now.

With the heat wave in San Diego, a Daiquiri was a must-have last night. Clement Canne Bleue (2011) is a single varietal rhum agricole, made from a variety of sugar cane from Barbados that has a violet-greyish tinge. I brought it back from a trip to Paris a while back, and had not made a Daiquiri with it yet, just a Ti Punch.

On its own, in terms of intensity, it’s on par with Neisson but less powerful than La Favorite. It makes a wonderfully aromatic Daiquiri, very nuanced and elegant. 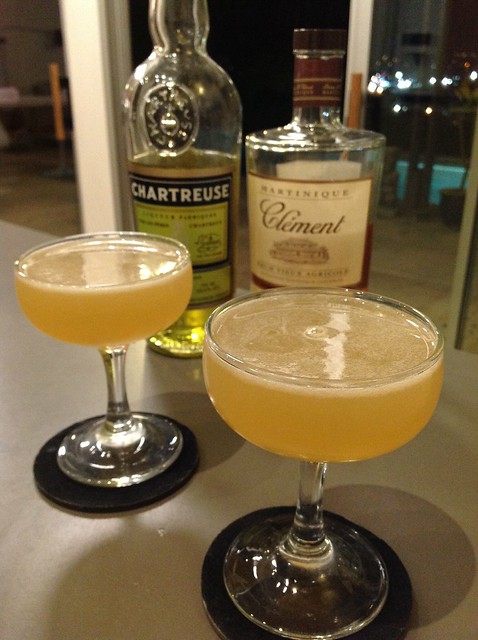 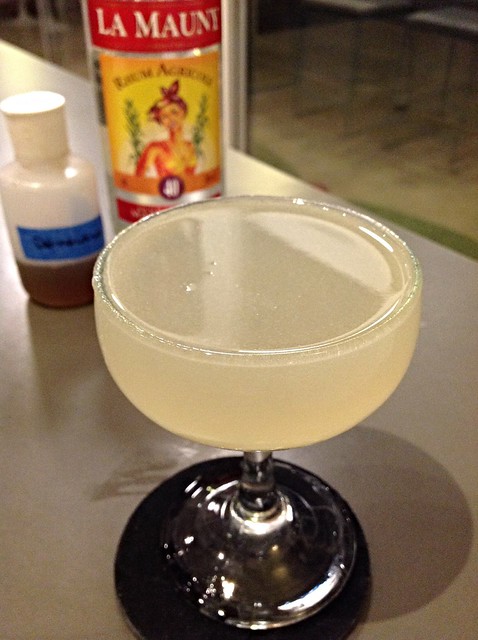 Very nice little hint of smoke and agave from the mezcal. It reminds me of Phil Ward’s FWB (same idea, with batavia arrack). 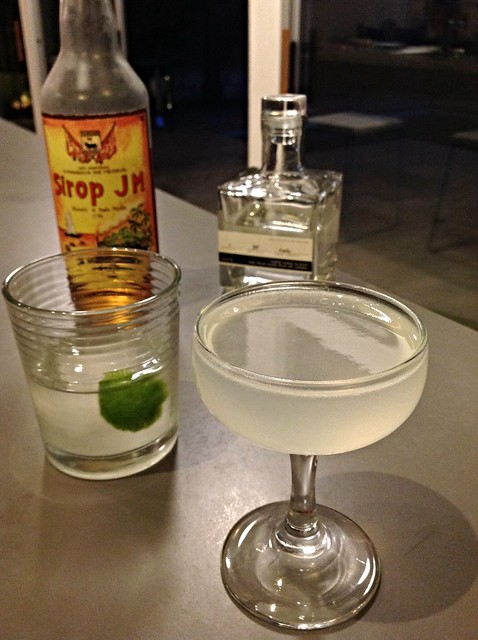 It is very refined and delicate. It’s floral, refreshing and light, but then the saffron gives it an earthiness that anchors it. It’s complex and the taste keeps changing with every sip, so you feel like going for another one immediately after the first one.

Luau Daiquiri (Jeff Berry) with Plantation 3 Stars rum, lime juice, orange juice, vanilla syrup. I had to add 1/4 oz lime juice because the drink was too sweet. It was very meh. A diluted Daiquiri with orange juice. I guess I will have to do more research for the orange juice challenge.

Here is a Daiquiri no. 3 from a few nights ago (Constantino Ribalaigua Vert, ratios by Jeff Morgenthaler) with Damoiseau rhum agricole, lime juice, oro blanco grapefruit juice, maraschino liqueur, simple syrup. Well, that one didn’t work so well with the Damoiseau. It enhanced its glycerin-like notes. It wasn’t horrible by any means, but that rum wasn’t the best fit for this drink. (It was better with Plantation 3 Stars for example.)

This is a great Daiquiri variation, tasty and simple. Adding it to my (long) list of favorites.

This is rather wonderful. I typically shy away from drinks with pineapple juice, but that one felt like a Daiquiri with subtle elements highlighting this incredible rum – I got a lot of banana! 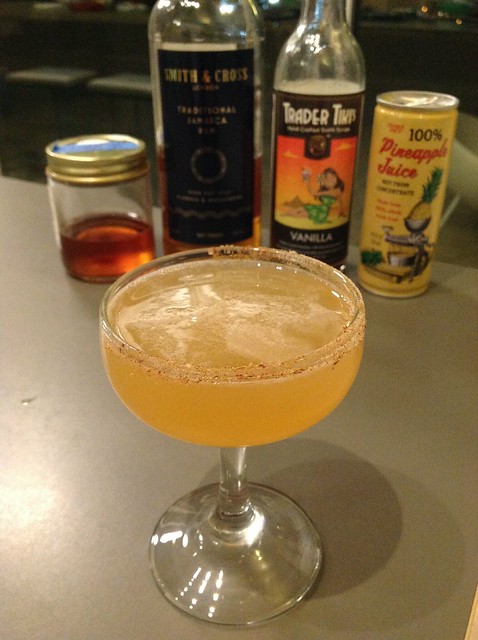 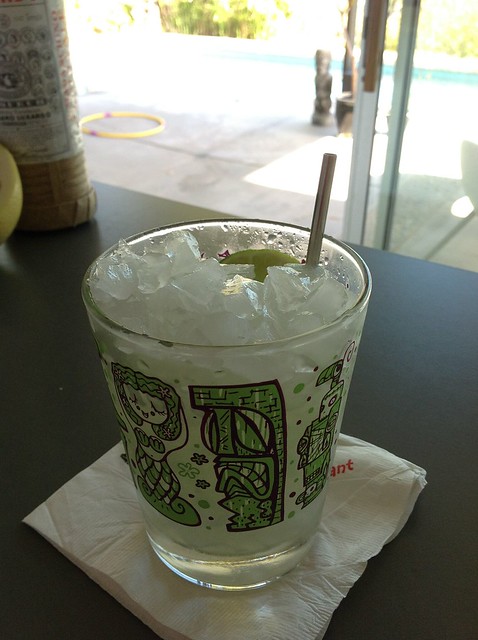 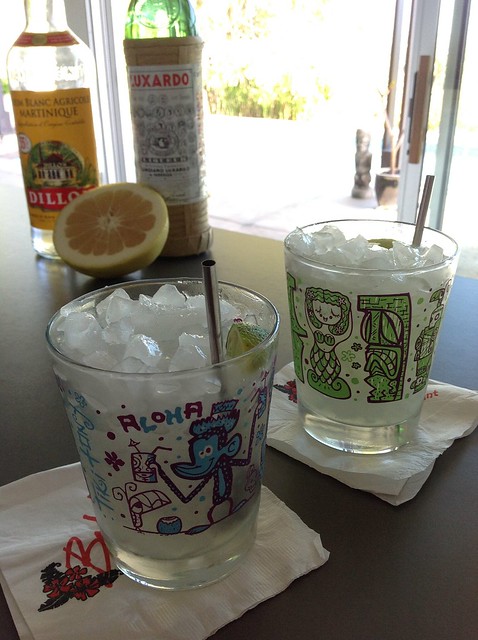 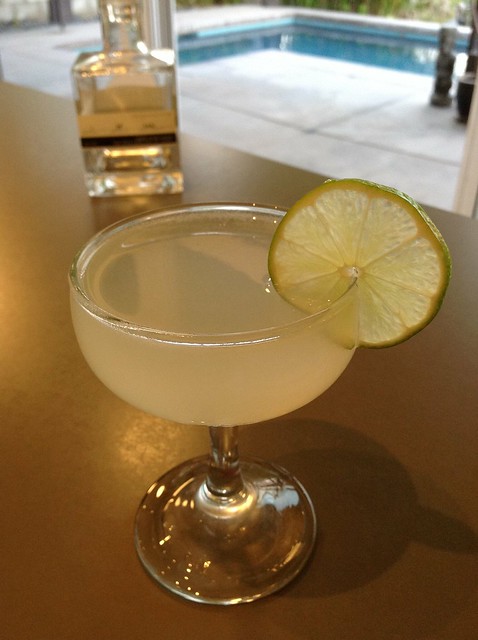 Finally tried the Rum Crawl with (the last of) my homemade falernum. It’s fabulous, complex and tropical. 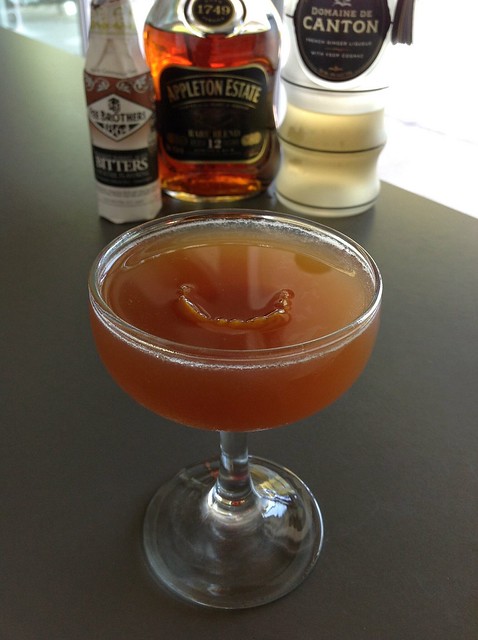 9 thoughts on “Daiquiris with benefits”