The French are not known for their cocktails. It’s true that there is the kir, a French creation which is simply cassis (blackcurrant liqueur from Dijon) with white wine (aligoté, a dry white wine from Burgundy), and its regal version, the kir royal (*). But it would feel a little strange enjoying a libation that references the king on Bastille day. Looking for cocktails with a connection to France, the French 75 immediately comes to mind. Created in Paris, it is a very nice drink, especially with gin. The cognac version has the advantage of combining two French ingredients, cognac and champagne. But I did not feel like opening a bottle of champagne, so I searched for something else.

Continuing with the cognac theme, I picked the Maid in France (**). The Maid is a family of drinks based on the following formula:

With the cognac + citrus combo, you could say that it is a relative of the Sidecar (also thought to have been created in Paris). But it has a much lighter feel due to the fact that simple syrup, rather than orange liqueur, is used as the sweetener. The muddled mint and cucumber add another element of freshness. And it’s served on ice with a fragrant garnish. 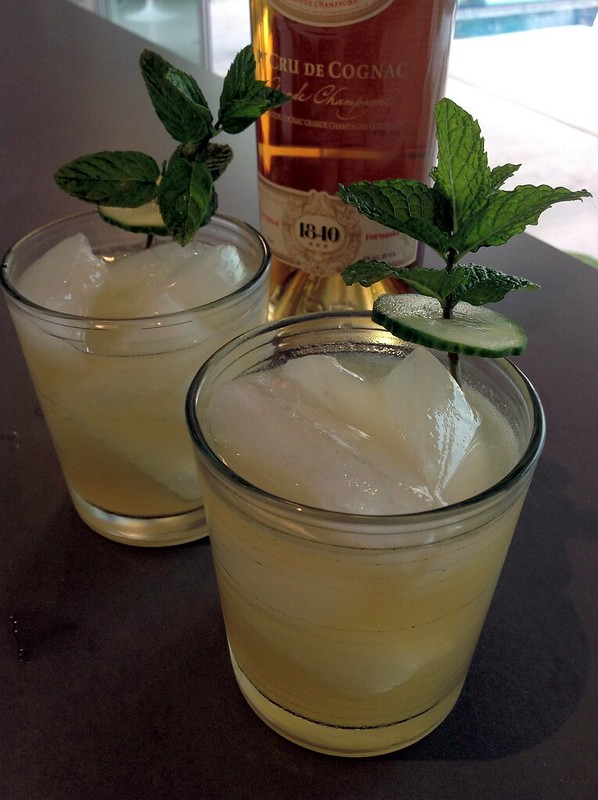 I tried this drink with various cognacs and found that it worked best with Pierre Ferrand 1840, a cognac that was specially designed for mixing with input from David Wondrich.

Yes, I am a little bummed that France is not represented in the List of 25 Most Influential Cocktail Personalities of the Past Century that Imbibe Magazine published a while back. With the recent enthousiasm for high quality cocktails in France these days, maybe the time will come eventually…

(*) There is no “e” at the end despite what you often read.
(**) Not to be confused with Jim Meehan’s French Maid, a similar drink with the addition of ginger beer & falernum.