Dinah Sanders who authored the Art of the Shim, a nice little book about low-alcohol cocktails, is hosting Mixology Monday this month and has chosen shims as her theme. She defines them as drinks that contain less than half an ounce of strong spirits.

One of my favorite discoveries in the book is the Rhum Dandy Shim by Craig Lane of Bar Agricole in San Francisco. It’s red vermouth-based and cleverly uses rhum agricole and absinthe as modifiers. It manages to create a huge amount of flavor with only half an ounce of hard liquor. A very inspiring drink that shows that you don’t have to compromise on taste with these low-octane libations.

I liked it so much that I decided to use it as my template for the MxMo challenge. One of the keys in the Rhum Dandy Shim is the incredibly flavorful rhum. I wanted to try a rye variation and went with the Willet 2-year rye that was released a few months ago. The first Willet-distilled rye in many years, it’s overproof at 54.7% alcohol by volume, a bit rough around the edges for sipping (the 4 year is my preference), but its fieriness works great for mixing. Because I switched from rum to rye, I went with lemon juice instead of lime. I kept the other elements pretty much the same. 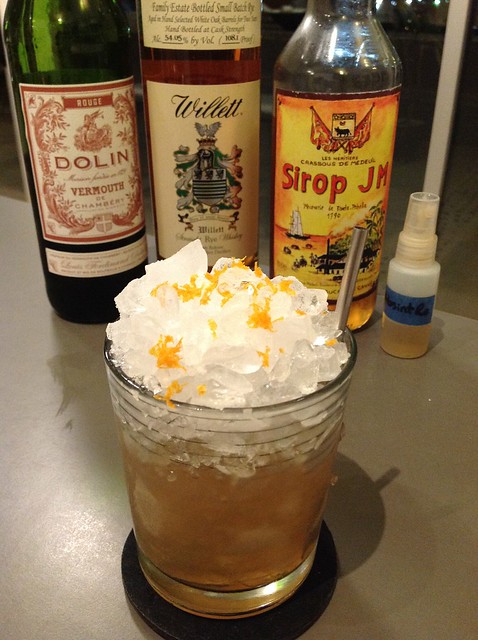 That was a pretty delicious drink. What I really liked about it was that all the elements highlighted the rye. It had plenty of punch for a low alcohol cocktail, and the rye gave it a lot of flavor and a long finish.

I was curious about the origin of the Dandy and was wondering if it had been done with rye. So I checked the Savoy Cocktail book and, sure enough, found something very similar. The Savoy’s Dandy Cocktail has equal part rye and Dubonnet, a French quinquina, which is a type of aperitif wine closely related to vermouth that uses quinine as a bittering agent. The drink also includes orange as a flavor with some Cointreau liqueur.

But the Savoy’s Dandy Cocktail is not a low alcohol drink. For the challenge, I modified it by decreasing the amount of rye and adding some lemon juice and cane syrup.  I did not have any Dubonnet and substituted another quinquina, Bonal. The resulting drink has a lot of bitter orange notes that harmonize well with the Willet rye. The spice and slight bitterness from the Bonal make it a cousin of the Creole cocktail, which is not a bad thing at all. 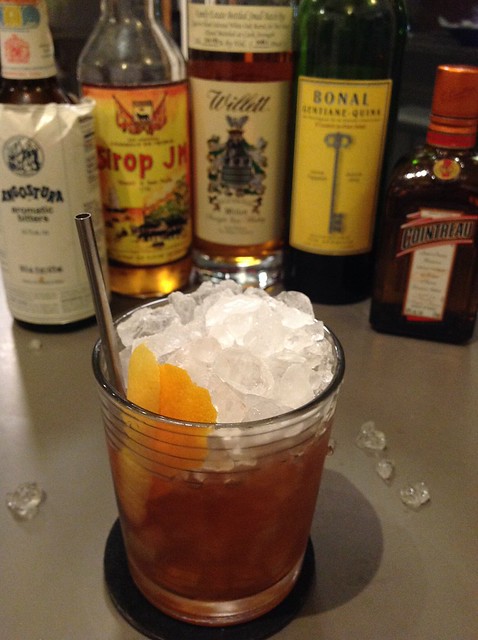 Thanks to Fred of cocktail slut for these monthly cocktail meetups, and to Dinah for being the host this month.