Since living in the U.S., there are a few holiday traditions that I have adopted. While I refuse to be involved with turkey in any shape or form, I can certainly appreciate a nice holiday punch. I’ve noticed that it tends to make family reunions a little more pleasant for everyone. And some, like the Fish House Punch, are so tasty that they get requested year after year.

There is a little place from out of town
Where, if you go to lunch,
They’ll make you forget your mother-in-law
With a drink called Fish-House Punch. 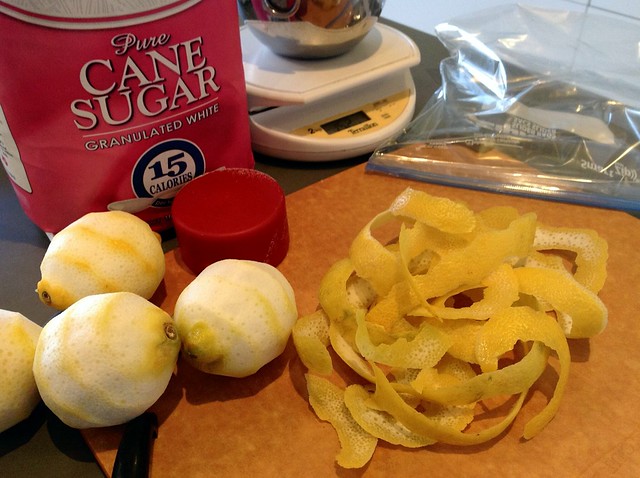 It is in David Wondrich’s Imbibe! that I first read about this punch that originated in Philadelphia. At the base of this punch is what David Wondrich calls an oleo-saccharum, a mixture of sugar with lemon peel that is allowed to macerate while the aromatic oils are slowly released from the lemons skins through osmosis. Maybe you will be tempted to skip this step and just use lemon juice and sugar, but that would be a grave mistake. The flavor imparted by the lemon peel is what gives this punch its depth. 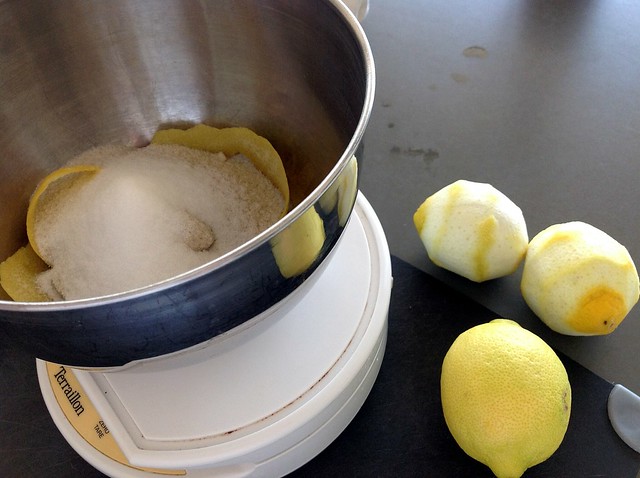 In the past I used a mortar to muddle the lemon peel with the sugar. For large batches, mixing the peel with the sugar in a stand mixer using a paddle attachment works well. But these days I just use Jeff Morgenthaler’s lazy technique and dump the lemon peel and sugar in a ziplock bag, seal the bag after expelling the air, and let the time do its thing. Within 24 hours you are left with a flavored sugar syrup. Then I just add the lemon juice to the bag, mix in the bag until all the sugar is dissolved, and filter though a metal strainer into a metal bowl to remove the peels. 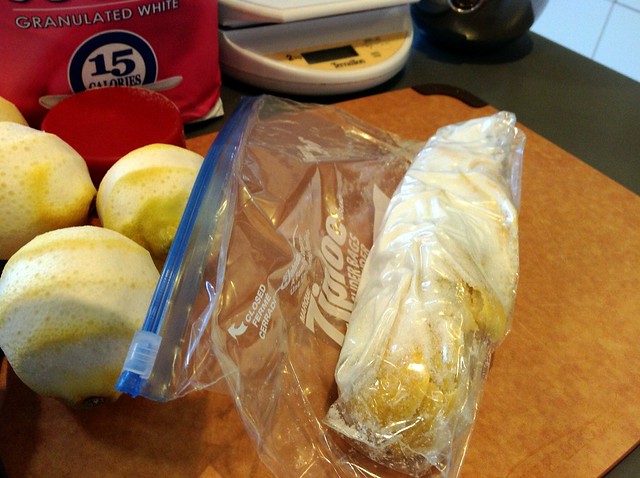 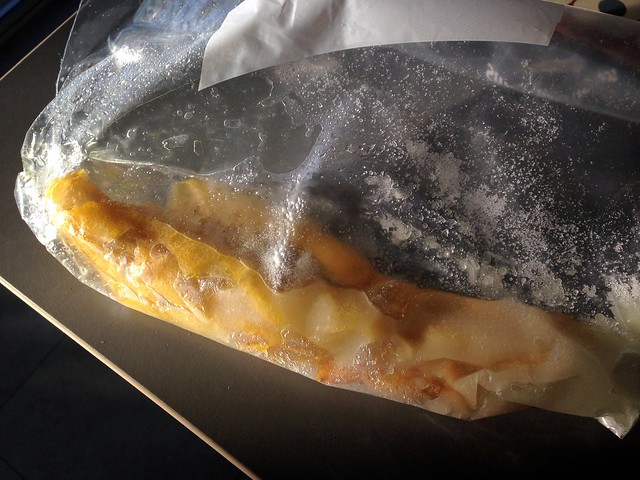 At that point, I start adding the other ingredients to the mixing bowl. For the rum, I use a dark rum. In early iterations of this recipes, I used Whaler’s because I had a few bottles available. Nowadays I try to use something a little more flavorful like a Jamaican rum, Coruba for example.

For the cognac, I went through different brands. I tried various French brandies from Trader Joe’s (Raynal and others) but could not find anything that I found remotely palatable. I was not satisfied with Remy Martin VSOP or Courvoisier VS, but I’ve been happy with Landy VS. As a side note, the punch may be the occasion to finish a few bottles that you may have accumulated throughout the years (within reason). Obviously I would not use anything that I would not want to drink neat, but it’s a good opportunity to streamline the liquor cabinet and make room for new things.

Traditionally, the third liquor component in this punch is peach brandy, which is notoriously hard to find. It’s been more than 5 years since I’ve made my first FHP and I am still looking. Anyway, this is not a valid reason for not trying this punch because a mixture of 2 parts calvados to 1 part apricot brandy can be substituted (or just calvados, or applejack).

At that point you can add water or decide to add it later. I prefer to bottle the punch without water to keep things to a reasonable volume. I store the punch in 1-liter square flip-top glass bottles that I bought at the Container Store. For larger amounts, I like the 2-liter beer growlers from Stone Brewing. They can easily be  carried around, and punch is a great thing to bring to a party. 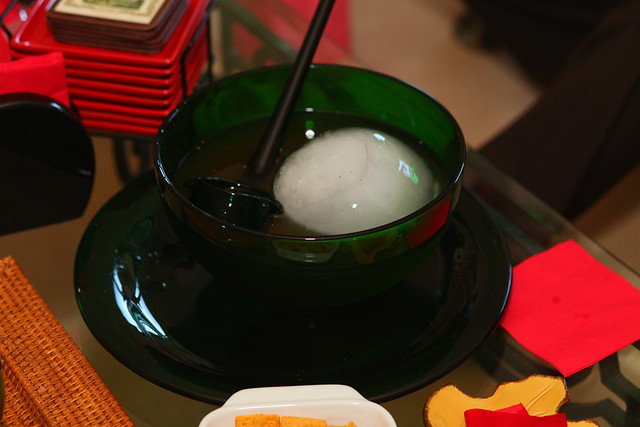 Don’t forget the ice. If you are going to serve the punch in a punch bowl, you can make a large block of ice in a metal bowl the day before (I have a set of bowls with plastic lids that are especially handy).

When you are ready to serve the punch, all you have to do is add water, mix, and add the ice. Grated nutmeg is a nice finishing touch.

Fish-House Punch (based on David Wondrich, scaled down to 1/3) 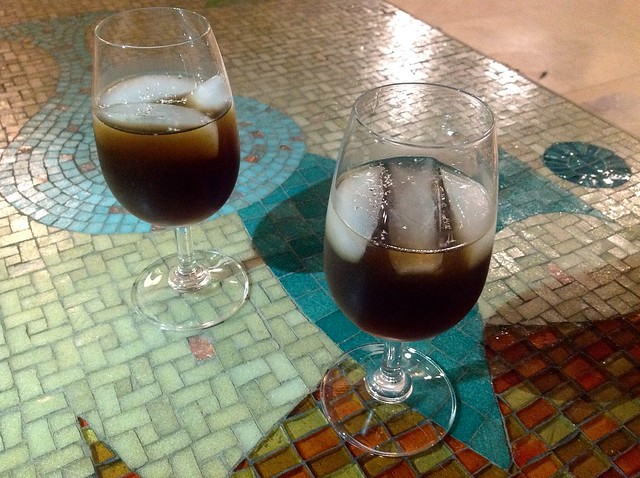 If you are not sure about the quantity you would like to make, keep in mind that the punch has an almost infinite shelf life in the fridge (diluted or undiluted with water). Last night I tried a batch I had made a year ago for Thanksgiving, and it hasn’t changed a bit (except for the fact that it looks lighter). So don’t hesitate to prepare larger amounts. It tends to disappear rapidly anyway. 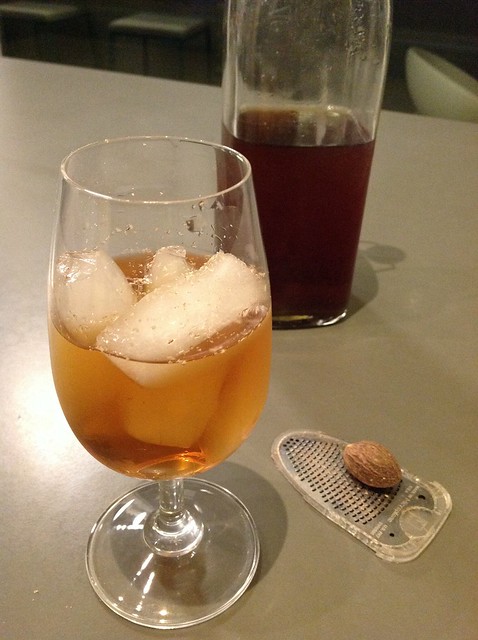 How much water should you add to your punch?

For some reasons the published recipes for Fish House Punch are all over the board. I think calculations tend to get fuzzy after a few glasses of punch…